Roughly a week ago I received a telephone call from a friend pertaining to an incident that just occurred in his neighbourhood. A man armed with a sharp object attacked a resident and stabbed them in the neck, after which a member of the public fired his revolver and shot the assailant. Members of the community then overpowered the suspect and arrested him.

The firearm used was a .357 Magnum snub-nosed revolver with a 2-inch barrel, and it was loaded with hollow-point ammunition. The shot struck the aggressor in the arm and penetrated the skin, causing a wound no more severe than a deep cut. The bullet then continued to travel around the arm and towards the armpit, and finally came to a rest behind the ribcage. It completely failed to penetrate any deeper than the flesh below the epidermis, and the bullet did not expand at all. The assailant remained completely mobile and was not in obvious pain, and he verbally communicated with the EMS personnel as he was walked to the ambulance for further treatment.

The psychological impact of having a firearm discharged at him was in this case sufficient to encourage the aggressor to surrender, but they were more than physiologically capable of still exerting violence if they chose to do so. All-in-all, this can be considered a successful defensive gun use (DGU) despite the complete lack of ballistic performance from the round fired.

Now, this is one of the most bizarre things I have come across in a long time. Anything in .357 Magnum calibre should most certainly perform at a respectable level of terminal ballistics (considering that people shoot bears with it), yet the revolver and ammunition failed spectacularly in this regard. In fact, a CO2 gas-gun with ceramic solids would, according to what I have been told, have done a near-equivalent job.

Why did this happen?

For one, the ammunition was old and very likely improperly stored over the many years it was kept. But there are other factors that must also be considered.

As you may be aware, I am not a big fan of revolvers for self-defence purposes: the design is obsolete, and offers inferior reliability and capacity in comparison to modern semi-automatic pistols. Be that as it may, the aforementioned ballistic result was not only due to the fact that a snub-nosed revolver was used, but it very likely did contribute: considering that the barrel of the revolver is only around 2-inches long, and that revolvers vent much of the propellant gas from the gap between the barrel and cylinder, the cartridge will underperform. A brief glance at the graph below illustrates the steepness of the rate by which performance degrades in barrels shorter than 6-inches: 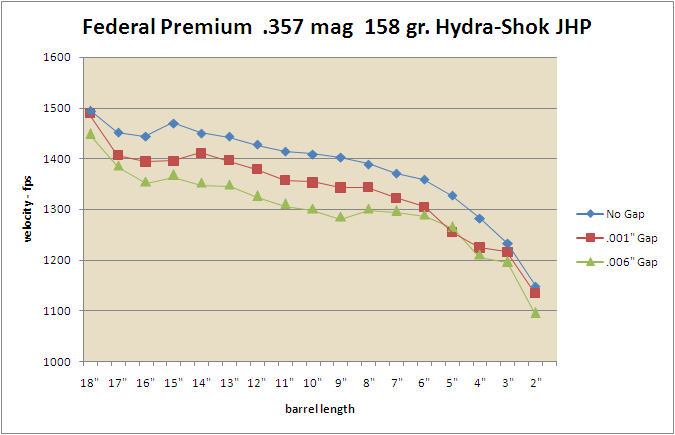 In conclusion, an old cartridge was fired out of revolver with a 2-inch barrel, and the velocity was not sufficient for the bullet to perform as it should have.

There are a few lessons we can learn from this episode…and no: it is not “revolvers sucksorz!”

Firstly, if you are going to carry a firearm for defensive purposes (as you should), make sure that the firearm and ammunition are serviceable. This would require you to perform basic maintenance on the weapon at least once a month, and function test it with your carry ammo. Especially if it is carried every day and the cartridges are subjected to moisture and widely varying temperatures. Opinion diverge on how often is often enough, but if you shoot your carry gun every six months and replace the ammunition at the same time you should be covered.

Secondly, we need to understand that bullets may not always behave as they are designed to. Freaky things can (and often do) happen in the high-speed world of terminal ballistics. Identifying and dealing with equipment failure extends beyond merely keeping your gun in the fight: it involves bullet failure as well. Even though in this specific case one (underperforming) shot was enough to stop the fight, you can never count on it.

Thirdly, there are two different mechanisms that stop aggressors from continuing their attack: the physiological stop (due to shutting down the central nervous system or lowering the blood pressure sufficiently) or the psychological stop (the aggressor does not want to continue their attack). Many people comment on social media that criminals will flee when confronted by armed civilians, and so-doing put all their faith in the psychological stop. Even though it exists and does happen, you cannot put remotely as much store in it as you can in a physiological stop. Understanding the difference can save your life.