Before I start, I need to add a disclaimer.

I am not anti-SAPS by any stretch of the imagination. It is staffed by many good men and women who put their lives on the line daily, and who try to make a positive difference to the safety of their communities. They deserve praise and admiration. The SAPS also deserves far, far better leadership than it is currently subjected to. To those officers who continue, despite these most trying times, to perform their duties with pride, integrity, and diligence: I thank you from the bottom of my heart. You are an inspiration to us all, and a beacon of light in times of darkness.

You know who you are.

This has not been a particularly good Easter weekend for the authorities. Early on Good Friday morning several criminals raided 9 SA Infantry Battalion’s base in Khayelitsha, and escaped with six R4 automatic rifles and ammunition. Later the same day a report in the Daily Dispatch surfaced about a Dimbaza SAPS constable who is on the run after stealing five firearms from a police station.

The weapons in question were confiscated from private persons in the township, and were supposed to be sent for ballistic testing when they were stolen by the official. It is not the first such an incident at Dimbaza police station; in 2012 thirty 9mm pistols were stolen from a safe in the station.

What is concerning about the incident is not only that a police officer, tasked with the duty of upholding law and order, would commit such a crime, but that if it weren’t for whistle blowers inside the SAPS leaking the information the entire thing would likely have been covered up by the authorities.

Whether or not this obfuscation is done with the intent of avoiding embarrassment, or for the more sinister reason of protecting the individuals complicit in these crimes, is hard to tell.

Considering that just over a month ago, on the evening of 13 March, a break-in at Peddie police station’s SAP 13 storage facility resulted in the theft of 30 firearms (including 12 R5 automatic rifles), the SAPS have much to be embarrassed about.

The result of all of the above is that in little over a month the State has supplied criminals with over 41 firearms, of which 18 are fully-automatic R4 and R5 rifles.

None of these aforementioned incidents are a deviation from the norm, sadly. The authorities have long been a reliable and constant source of weaponry for the criminal underworld, as detailed in many of my previous writings regarding the subject.

This is why I find it unfathomable that Western Cape FLASH (the SAPS division responsible for Firearms, Liquor, and Second-Hand goods) would find it prudent to not only intimidate citizens whose firearm licence cards have expired to hand their weapons into SAPS custody, but would in fact perform midnight raids on their homes and confiscate the firearms even though the gun owners in question still possess a valid Arms and Ammo Act licence for their weapons: clearly those weapons are in safer custody with their owners than they are with the SAPS!

Incidentally, both these actions by Western Cape FLASH are unlawful: the former amounts to sub-judice intimidation since there is a High Court case pending this month to address the issue, and the latter is in contempt of a Pretoria High Court order.

It required the intervention of the Parliamentary Portfolio Committee on Policing and the national commissioner to put a stop to this nonsense, and considering that the Minister of Police and senior SAPS generals were chastised by the PPC in March for failing to follow the required procedure before unilaterally declaring a firearm amnesty (which is now scrapped/suspended), it appears that the only consistent attribute present in SAPS senior management is contempt of the court and contempt for due process.

It is ironic that the generals choose to saddle such a lofty moral high-horse when the operational level of their organisation is in complete shambles and disarray, and when it appears to be in the grasp of a firearm theft epidemic.

Perhaps I need to break the reality down for them a little:

Unlawfully intimidating law-abiding citizens is not how you win trust, respect, and cooperation.

Thirteen SAPS officers raiding an old man’s home and illegally confiscating his lawfully-held property is not how you win trust, respect, and cooperation.

Ignoring High Court orders and lying to the public is not how you win trust, respect, and cooperation.

Doing all these things with the excuse that “I am just following orders” is not how you win trust, respect, and cooperation.

They achieve exactly the opposite.

And in these times where SAPS reliance on community cooperation is more vital than ever, you can’t afford to throw away this relationship. 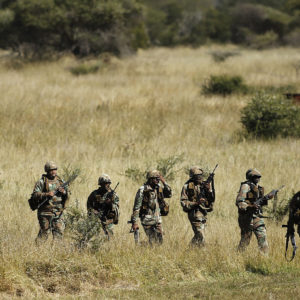