In years past, owning a firearm was a simple matter. So simple, in fact, that you were expected to have at least one. Discussions around the braai fires were more along the lines of preferred farriers, the co-op’s new policy and whether or not old Tan’ Sarie up the road has had her bunions removed yet.

Fast-forward a decade or five, add an unhealthy dash of attacks on our rights and a pinch of agenda-driven media, and the situation looks somewhat different.

People seek out firearms for personal protection, but due to the perceived politically incorrect nature of the thing, discussing them with your colleagues, for instance, does not sit well. People are unsure about their rights, their duties, and the myriad of myths around the topic. Where do the enlightened go when confronted with questions? Of course. The Internet.

The Internet is awash with information about firearms. Facebook is one of the most prolific in terms of opinions, and it has created an incredible platform for posting pretty much anything you think exactly as you think it. Moderation is difficult, and information is plentiful. Discussion forums may be more topical and organised, but the opinions still need to be weighed for validity.

I’ve heard this phenomenon termed the “signal-to-noise ratio”. Very often what you read may make perfect sense, but be utter bollocks. Discussion forums, and to a lesser extent Facebook, has the incredible advantage for having a large number of informed minds on-hand to consider the posed problem, and through (often robust) debate crystallise the correct response. The concept of “two heads are better than one” is the reason why higher courts have more than one judge looking at the same problem, after all. Established and properly moderated forums very often have a higher ratio of useful to useless information.

Beware, however. Personalities behind the safety of a computer screen may mean that some opinions are punted more so than others, often to the detriment of the health of the platform. It is on you, dear reader of this esteemed blog, to apply critical thinking at every level of information gathering. Question everything you read, until satisfied that it is valid. (Even what is written on here by me. – Ed)

The term common-sense is often bandied about. In our context, it just means you need to apply your own mind to the problem, and based on that, critically consider the information you get.

I mentioned earlier that firearms make for emotive topics. We are all creatures of emotion, and it can often cloud sound judgment. Yes, the Browning Hi-Power is an incredible pistol. Is it still the best at what it does? Well, nearly everything else in our lives have benefited from new designs, why would the pistol not? Yes, the .22LR calibre is lethal. And perhaps it is true that the Mossad used it in suppressed pistols to conduct covert assassinations. Is that the same as having to stop a drugged-up, adrenaline fueled, enraged robber hell-bent on stabbing you to death? Yes, some people will tell you to carry your pistol with an empty chamber, and that they can rack it as fast as you can shoot your loaded pistol. Does that mean that can rack and shoot faster than THEY can shoot the loaded one? Go through the mental motions.

These are simple examples. Out in the depths of the internet the waters get murky. If you are going to find information on the internet, read a lot. Absorb it. Mull it over. Apply logic. Discard the illogical (like RIP G2 bullets!).

Blogs, such as this one, are generally not subject to the think-tank effect of discussion forums. Opinions and suggestions are likely to be closely linked to the authors own line of thinking. There are good blogs, and there are bad blogs. Read them all, and use your sound judgement.

Except for this blog, of course.

Guns Save People: A… 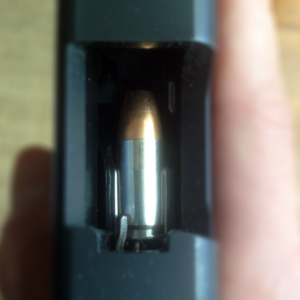