One of the most fiercely-debated issues across societies is the one pertaining to civilian firearm ownership. There are few civil rights discussions quite as polarizing, and the legislative responses of nations to the question of civilian gun ownership varies broadly. This makes it incredibly difficult to separate fact from fiction, and so-doing present an accurate portrayal of the matter to people who find themselves sitting very much on the fence.

To start off with, let me unequivocally state that there is no obvious correlation between restrictive firearm laws and lower levels of violence in societies. I already did a brief discussion about this matter regarding the United States. Furthermore it must be noted that countries with highly restrictive firearm laws, such as South Africa, Jamaica, Mexico, Honduras, Brazil, Russia, India, and so forth suffer from incredibly high rates of homicide. The fact that both Brazil and Russia have recently decided to relax their firearm laws in order to allow citizens easier legal access to guns in order to defend themselves against violent criminals is instructive. However, we don’t want to confuse correlation with causation, and it should be obvious that the origins and causes of violence in society are far more complex and numerous than its gun laws.

It has become cliche to state that gun laws don’t make societies safer because criminals don’t obey laws, but it doesn’t mean the statement has become any less true. Criminals have always, and will always, find ingenious ways to circumvent restrictive firearm legislation. The only certain outcome of such legislation is to effectively disarm the law-abiding segment of society, and condemn them to the status of unwilling and defenseless victims. This is hardly a just and rational result, but governments around the world (very much South Africa) continue to do so.

A mere glance at the trend of our homicide rate from its peak in the mid 1980s, to the implementation of the Firearms Control Act in 2004, and until present day should confirm that stricter firearm legislation has certainly not led to any improvement in the safety of our society. This, again, is not surprising. After the Port Arthur massacre Australia implemented the National Firearms Agreement in 1996, and there was no reduction in the homicide rate (which was also on a  steady downward trend) until at least 3 years later. Even though so-called “gun murders” declined immediately, Australian murderers seamlessly and effortlessly carried out a weapon-substitution so that murders by use of sharp objects increased markedly, leading to an initial increase in overall homicides! Amazingly, stricter gun laws didn’t have the advertised outcome.

Jamaica has had perhaps the most interesting result of all after implementing stricter firearm legislation in the mid 1970s. After effectively banning civilian firearm ownership, within seven years their homicide rate nearly quadrupled. Today it remains at a level that puts it among the top 5 homicide rates in the world.

Gun control in South Africa has a checkered history. The British colonial authorities twice attempted to forcibly implement gun control on the native population: the amaHlubi (successfully) in 1873, and the Basotho (unsuccessfully) in 1880. The latter event left such a mark on the African psyche, that it became a founding principle of the ANC in Bloemfontein some three decades later. During Apartheid the National Party government also made use of gun control to restrict the black population from legally owning firearms. It is therefore rather surprising that the ANC, upon coming to power in 1994, sought to continue this oppressive tradition. Considering that the ANC, through special concessions granted to it before the 1994 general election, itself owns weapons licensed to the party, their stance on civilian firearm ownership is more than a little hypocritical.

Renewed attempts at criminalizing gun owners for what amounts to nothing more than an administrative oversight are alarming, and indicative that this particular set of rights and privileges are firmly in the government’s sights.

Fortunately there has been an awakening of sorts among South Africans regarding their civil rights. The conduct of the government over the last few years, referring specifically to State Capture and other flagrant forms of brazen corruption and oppression, has made us all much more keenly aware of our rights and the urgent need to safeguard them from erasure. Perhaps the fact that more and more South Africans have come to realize that the government and the police are completely incapable of protecting them from violent crime, and that citizens must resort to whatever legal means they have available to protect themselves and their families, have something to do with it.

Firearms are a powerful equalizing tool in the hands of a competent user. They allow the elderly, frail, and physically meek to effectively defend themselves against far stronger and more violent aggressors. The newspapers are filled with weekly accounts of women and men of all races and ages who successfully defend themselves and their loved ones against armed criminals. Clearly it can be done, and it works.

Owning a gun for protection is no longer the taboo or peculiar occurrence it once was, and I am hoping that as more responsible and law-abiding people embrace doing so we may see the tide begin to turn against the violent criminality that plagues our society. An armed target is a dangerous target, and criminals do crime because it pays. When crime becomes a costly career choice for the perpetrators, it stands to reason that there will be less of it committed.

We all have the Right to Life as guaranteed by the constitution. But without the tools to protect your life, your rights become nothing more than pretty words on a piece of paper.

It Doesn't Matter if… 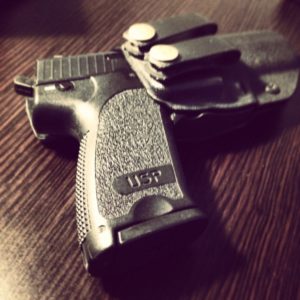 How to Present Your Firearm… 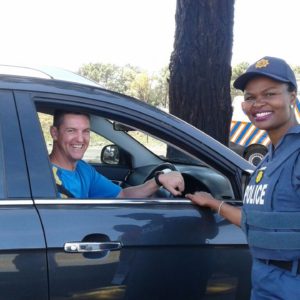