South Africans live in a beautiful but dangerous country. I need not bore you with excessive quoting of the annual crime statistics to emphasise that our society is plagued by a brutal crime scourge which does not discriminate regarding colour or creed. Perversely crime is an immensely unifying factor of our nation: we all suffer from it, we all know someone who has been a victim, and we are each and every one of us is potentially next in line.

A brief glance at the 2013 crime statistics informs us that 16 211 murders, 66 197 sexual crimes, 16 344 attempted murders, 185 427 assaults with the intent to inflict grievous bodily harm, and 105 779 robberies with aggravating circumstances were committed last year. Murder increased 4.2% from 2012, attempted murder by 6.5%, and aggravated robbery by 1.2%. The South African private security industry achieved an annual turnover of R50 Billion in 2011 and is the largest private security sector in the world. Compared to the 2011/12 SAPS budget of R57,9 Billion, it is clear that South Africans take their private security very seriously and are willing to spend a vast amount of money to keep themselves, their loved ones and their property protected. Despite this we are experiencing an upward trend of violent crime, and it is a problem affecting us more and more each passing day.

The SAPS are overstretched, undertrained, underequipped, and undermanned. There are sterling men and women in the service who are trying their best under adverse circumstances to keep law and order enforced in our country, but they are unable to be everywhere they are needed at any time they are needed. It reminds me of the saying, “when seconds count, the police are but minutes away”.

The challenge now facing law abiding citizens is what more can you possibly do to protect yourself? The solution lies in making yourself as difficult and unattractive a potential victim as you can. Failing to put up resistance to criminals is no guarantee that you will not be harmed or killed: we see daily proof in our media of citizens who are raped, assaulted, and murdered for no reason what so ever even after complying with each and every of their assailants’ requests. Being a non-resistant soft target is not a method I would ever use or recommend when facing an attack by violent criminals. I was hijacked once in April 2007 and I resisted with everything I had available to use in the fight at the time. That is the reason why I am still here today: I was a hard target.

To become a hard target you need to possess the tools to make yourself one: the right mindset and the right physical tools with which to protect yourself. OC Spray (Pepper spray) and Tasers are better than nothing against a mugger and they have their place in any self-defence toolbox, but they are not effective tools for use against three or four armed home invaders who just kicked down your door. If you claim that nobody stands a chance against those numbers anyway, I know a few people who did just that and will very much disagree with you, but that’s a story for another day though. A firearm is the best tool for an ordinary citizen to use when their life is under imminent threat from an attacker: handguns are fairly easy to use with minimal training, they are easy to carry concealed on your person, and their ammunition is relatively cheap which makes frequent training affordable. It is not however a magic death-ray that stops any man in his tracks with a single shot, but in proficient hands they remain unequalled equalisers. When owning a firearm it is critical to be proficient with it, and this requires frequent and regular training. Training is an inseparable part of the responsibility that comes with owning a gun and it can make the difference between life and death.

There are numerous recorded successful defensive gun uses in the RSA every year, of which many do not involve fatalities or injuries and a great many more go unreported because the gun is never even fired. I have provided a link to some of these incidents that have been collected and recorded: http://www.gunsite.co.za/forums/showthread.php?32409-Successful-Use-of-Firearms-in-Self-Defense and http://www.gunsite.co.za/forums/forumdisplay.php?126-Lives-and-Property-successfully-defended-with-guns

In the United States there has been a strong, positive linear correlation between increasing firearm ownership and decreasing crime rates for the past few years. The following is an excerpt from 2010:

“Additionally the USA has seen record increases in gun sales during the last two years. With all these gun in private hands, the crime stats continue to drop.

According to the FBI, violent crime is down 6.2 percent over the same period in 2009, and homicide is down 7.1 percent. Further, robberies are down 10.7 percent, rapes down 6.2 percent, aggravated assaults down 3.9 percent, and burglaries dropped 1.4 percent.

So what it boils down to, is that the more guns, including automatic rifles, there are in civilian hands, the less violent crime there is. http://www.fbi.gov/news/stories/2010/december/crime_122010/crime_122010 ”

A firearm in the right hands is a powerful deterrent, and a powerful tool to protect and defend those who you hold dear, but this power comes with an immense responsibility. As a gun owner you must be a model citizen: avoid confrontations. Avoid doing things you consider stupid or irresponsible. Avoid going places you consider unsafe. In short, do everything that is humanly possible to avoid getting yourself into a situation where you will need to use lethal force to save yourself. Lethal force is a last resort, but it is better to have the capacity to exercise lethal force and not ever need it, than need it and not have it at all.

If what I have said has struck a chord with you, and you would like to know how to go about starting the process of turning yourself into a hard target, I would suggest paying a visit to the Gunsite South Africa forums: http://www.gunsite.co.za/forums/forum.php

It is a great and helpful resource, and it has helped many aspiring gun owners navigate the process of obtaining their first licenced firearm. Firearm owners in South Africa come from all walks of life: we are of all colours, languages, religions and economic backgrounds that make up the nation. We stand together and we help where we can to get more people involved in protecting themselves, and so doing build communities that are harder for criminals to target.

We are all guaranteed the right to life under the South African constitution, but unless you have the capability of protecting that right it is merely a pretty line written on a piece of paper.

Oscar Pistorius and the… 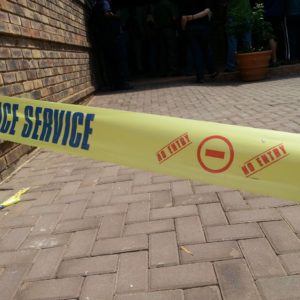