CZ versus Glock – Why the Internet Exists

If you haven’t sat glued to your screen watching this debate play out over social media before then you clearly don’t spend much time on firearm groups – and that’s ok. You see the same debate has raged over the braai, in the living room or even on the golf course. Yes it is that contentious and if you haven’t been party or an observer to it – don’t worry, it’s sure to come sooner or later.

The debate typically tosses statistics back and forth, lauds progressive over traditional manufacturing and of course delves into anecdotal performance reviews. I once met a bit of an oddity, the Ralph Waldo Emmerson of our time – he owned both and liked them equally. Clearly not a competitive man.

So where do I stand on the debate? Well one of my first weapons was a CZ75 pre-B, I later sold it to get myself a Glock 19 back in 1993. I loved both of them and enjoyed carrying them, now I know the current debate isn’t around the pre-B, so let me clarify by stating I don’t own a PO7 but have shot one a number of times and I quite like it.

That being said, I’m a firm believer in tools. Perhaps it’s just me, but I’ve been taught to regard a firearm as a tool – the proficiency of which is limited by the ability of the user more than the weapon. I spent days at the range with an array of firearms on the bench, Browning, CZ, Colt, Luger, Glock and even a few revolvers. We’d set up and work from weapon to weapon, load, present fire and move to the next one as rapidly as we could. The resultant holes in the target were the objective and not our opinions on the firearms.

You see, while we all have our personal preference in what we like just as do with cars, many of us have been taught to use whatever happens to be accessible to us at the time. Yes, we’d rather that it’s our own chosen weapon – but in it’s absence any weapon will work.

I’ve come to accept that some good natured chiding between friends over “why are you carrying that piece of….” Is more about being gun-buddies than serious debate. My friends who fish and play golf are as competitive around brands with their mates.

Yes, the Glock versus CZ debate is taken as seriously as a Mayweather / McGreggor bout, but it’s all in good fun so don’t take it too seriously.

If you do however find yourself stewing silently over the debate however, if you really burn up inside because you know you’re right and they’re wrong….if it is truly critical to you that others acquiesce and bow to the superiority of your firearm, don’t beat yourself up about it – it’s probably because you own a Glock. 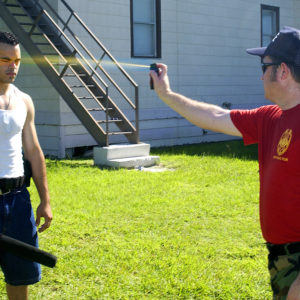 Lethal versus Less-Lethal - Which is Appropriate?

There is No Such Thing…