Human conditioning runs deep. Most individuals will unthinkingly perform an action in a way for no reason other than they have been conditioned to have a preconceived expectation as to what is the correct method.

This will manifest in the cup-and-saucer grip most beginners use. It’s what Eddy Murphy and Bruce Willis did, and they stopped terrorists, robbers, and all sorts of badguys.

One of the most difficult examples of conditioning to overcome, is the occurrence of cross dominance. Cross dominance is an individual that might be right hand dominant, but left eye dominant. This is often completely misunderstood and ignored in training entirely.

While the research is fascinating, it’s not necessary to understand the entire process of at what time in the womb dominance starts manifesting, or that it originates in the brain stem, rather than brain hemisphere. The important thing is that the body will favour one side over another, whenever we have two of something.

Whether this is leg, eye, ear, hand, or nostril, the brain will naturally recognise input from one side more than the other. It will also favour one side over the other when requiring action to be taken. In a practical sense, this is both of extreme importance, but, once understood, becomes no more important than which shoe you will put on first.

The techniques used are varied, and there are many means to achieve a goal. The important thing is to overcome cognitive bias and recognise accurately which is the dominant hand and eye.

Hand eye co-ordination is the basis for all tasks a human will do with their hands, is simply that you don’t have to watch your hands to be able to direct them to a place, or to perform a function. When catching a ball you watch the ball, not your hands.

Typically, the natural thing to do is for your hands to move to your eyes. The dominant hand will move to intersect line of sight from the dominant eye. This forms the means by which all firearms are sighted. Sights are mounted on firearms in a way to allow the hands to bring the firearm in line with the line of sight, and then a shot can be fired accurately.

This seems very simple, but when an individual is cross dominant, and statistically around 30% of people are cross dominant, then it can create difficulty in aiming or in firing a shot accurately. In handguns this is corrected easily by simply identifying which is the dominant eye. Many people, will however have difficulty doing this. They expect to be right eye dominant as they are right hand dominant.

When using rifles, carbines or shotguns, this will possibly lead to more problems. When deploying a rifle from the strong side shoulder to the weak side eye, people will often, quite humorously hit themselves in the face with a stock. While fun to watch in a sadistic kind of way, it’s likely to lead to precious time wasted in the real world. Think in terms of a game guide shouldering a rifle to stop a charging buffalo. While on the range he has all the time in the world to line up and close his one eye, in the field it requires fractions of a second to either stop a charge, or get trampled to death.

A competent instructor will be able to teach you the techniques you require to effectively use a firearm in whatever context you might need it for. Arriving at such a training course with the knowledge of whether you are cross dominant will allow you to not waste precious time trying to determine which eye to aim with.

There are many ways to find out which is you dominant eye. Having the expectation of being right eye and right handed dominant will cause some initial confusion and difficulty. Instead of overthinking the situation, I find the best way is to take whatever technique you choose to use and repeat the exercise multiple times. Perform the action rapidly. If there is any confusion after performing the task three or more times, you are more likely than not cross dominant.

This is not gospel truth, and many people can be ambidextrous, or whatever is the opposite of ambidextrous. Also some people just have difficulty with certain physical actions.

That said, symptoms of being cross dominant might be some of the following:

The list above is only a small number of issues arising from being cross dominant. Cross dominance is not a problem that is difficult to overcome. Having a person look at your stance and technique will easily and quickly identify any of the above symptoms.

Once you know what to look for, there will be no problems with correcting and developing your technique.

How Many SAPS Firearms…

Defeating the CFR with a… 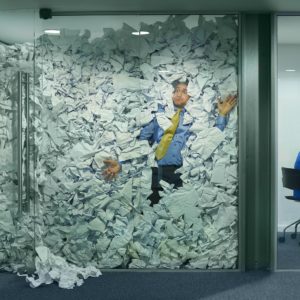