Yes – Women and Youngsters Can Shoot Better Than You

Sorry, that was a bit harsh….I don’t know if it is just me or is there a current explosion of new “instructors” in SA? I am not referring to actual knowledgeable people in the field of shooting, I am referring to the person who sees a younger shooter or a female shooter instantly thinking they need help. I have been shooting quite the number of years in a few disciplines (from air rifle back in school to my current IDPA/IPSC craze), and in every sport I have come across a few of these people.

Out of my own personal experience I see that static ranges are the worst-off. I took a few friends to go shoot my .303 and we were met by a guy trying to tell me how to improve our groups – without looking at them at all. Then there are the times I take the .30-06 out to 900m and slam gongs all day long before hearing that I am doing this and that wrong according another “knowledgeable” shooter. I understand that some things people do are not “right” according to others, but if it works leave it be: you may not agree with how someone like Jerry Miculek shoots, but will you try telling him how to shoot faster? Thought so.

Of course, there are guys who are trying to guide their girlfriends through their first time shooting a gun (and vice-versa), but that is a different point altogether. I want to get my girlfriend involved in IDPA and IPSC too, so I took her to a BDPC IDPA league where I know I will find some great shooters competing alongside me. We also met female shooters from different squads (great shooters) who offered to help her as soon as she is ready. These are the good type of helpful people in the sport. Sometimes a person learns better when guided by a shooter of the same gender – it is how it is. So, if your girl wants to learn how to shoot, don’t force her to learn exclusively from you. And please do get female shooters involved – shooting sports are great fun for all ages and genders. We need more women and young shooters in our clubs, and we cannot afford to chase them away.

As another example, my sister has been shooting air rifle and .22LR a tad longer than I did (she represented Gauteng four times at nationals, taking silver once) and I have seen these “top shots” trying to teach her how to shoot. This is an act of attention seeking. I usually ask what the person’s background in shooting is, and almost every time it’s the “ek skiet al vanaf ek 6 is” answer. And when I try to correct their logic I get the “wat weet jy?” answer.

Of course, there is a bright side to this story – when I started shooting IDPA at 15 I had the biggest support base in my shooting history. I did not know anything about the sport, and people saw that. Participating in my first matches always involved someone referring me to a knowledgeable shooter, who then took me under their wing to learn what the sport is all about. In IPSC the experience was the same. Most people in these sporting disciplines know what they are capable of, and it stops there. These are people I hope to stay friends with my entire life, as they can always teach you something to improve yourself.

I offer a tidbit of advice – if you see a young shooter or a female shooter (or any shooter for that matter) on a range clearly struggling, offer them help but remain within your bounds. If you know you are not capable of helping, then it is OK to let someone else who is suitable lend a hand. No one needs to be prove themselves as a “badass” in shooting. With all that said, assist who and when you can, just understand that the person you want to “help” may be the one not needing help at all. We all learn, and that will never stop.

(This article was not written to bash men in any way. Shooting is a male-dominated sport in SA, so statistically there will be more “showoffs” from that side. This is simply to put it to everyone that all people deserve proper training and inclusion)

Rueben is a young sport shooter who happens to be an IT student.

My brief shooting biography – I have represented Gauteng five times at SANSSU nationals, and three times at SAARA nationals. I do have a medal tally to prove I have some idea of what I am doing. I have been shooting IDPA for some time, but I am still new to IPSC. I am an active member of numerous clubs and associations, and I have had the privilege to assist many under-21 shooters in getting their first firearm licences.

What's With the New…

The SANDF is Not Suited… 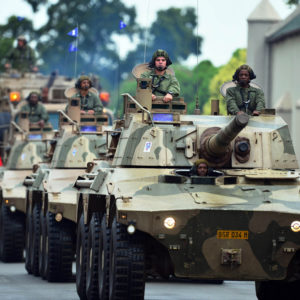