People make highly irrational decisions all the time. We decide first, and then attempt to rationalise our irrational choices with cherry-picked data. At least that is how Scott Adams sees us, and I agree with him. We are now fully in the run-up to Christmas, and Silly Season is heating up as it does every year. You have probably noticed the significant increase of armed robberies, burglaries and hijackings reported in the media. This is not particularly surprising, since we live in the 8th most homicidal nation on Earth. Violence and crime have sadly become an inseparable part of our national identity.

Despite our national crime situation, some South Africans react to becoming victims of violence in astonishing ways. A friend sent me the post below for comment. I have redacted the original poster’s name and certain other identifying details. Except for those changes, I provide it here sic erat scriptum. My intention is not to ridicule, embarrass, or lambast this person. Instead, I seek only to highlight certain inconsistencies of thought, which we can hopefully learn from. 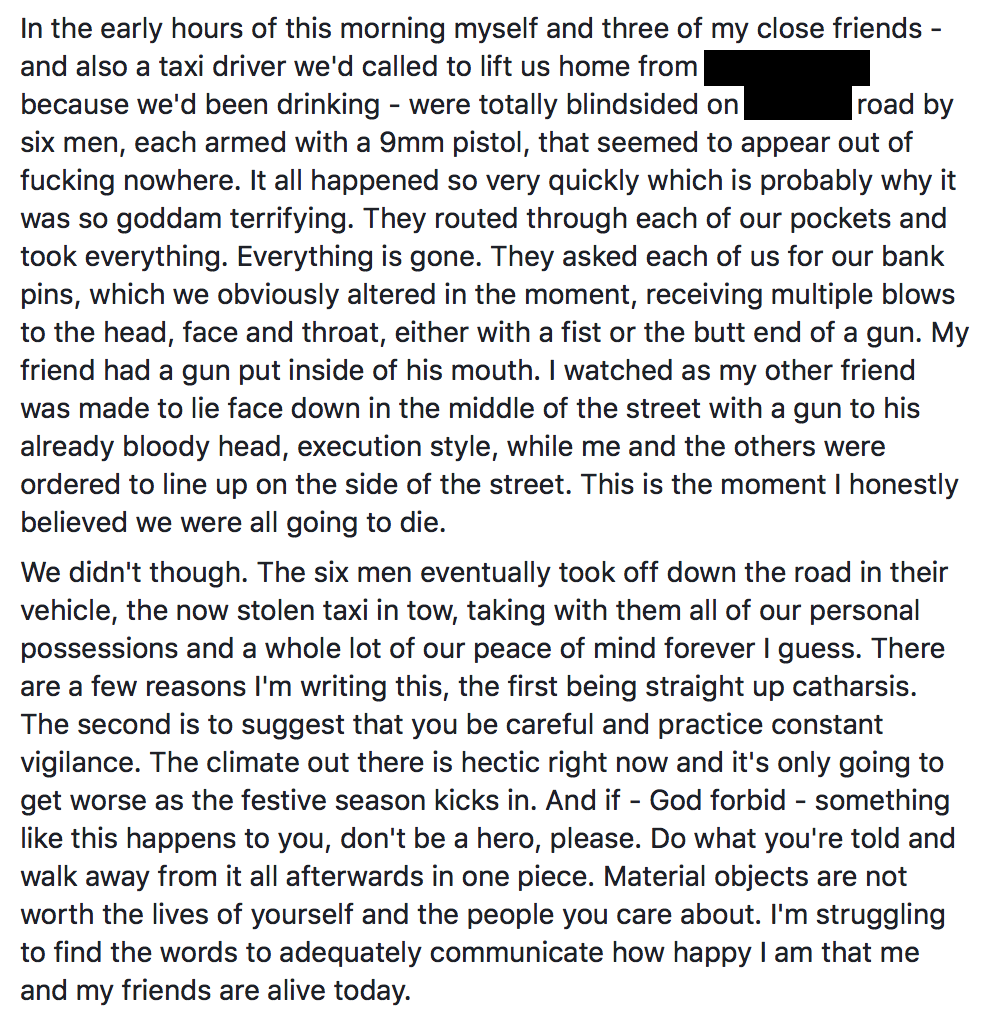 Considering that this was a very traumatic event, I will cut the victim a fair amount of slack. Firstly, practicing constant vigilance is good advice. It is not possible for you to spend your entire life in a state of high alert, but you can attain that happy medium of relaxed observance. Also, I concur with their assessment that the “climate out there is hectic right now”. It is Silly Season after all. However, I take exception to certain things they say.

Irrational approaches to crime and violence

My problem is where they implore us not to “be a hero”, and to “do what you’re told and walk away from it all afterwards in one piece”. This is rubbish. There is no guarantee that by complying with criminals’ demands you will survive the experience. We wrongfully believe that if we simply do as we’re told, we will drastically improve our chances of survival. Sure, sometimes victims get lucky and they escape the encounter relatively unscathed.

Many times they do not.

Why do we believe that criminals, who break the law for a living, will be merciful and conscientious when they have us at gunpoint? We balk at the thought of entrusting our lives to highly qualified surgeons. But we accept what violent criminals choose to do to us. Do you not find it a little irrational that when we are in a terrible situation, one where violent men with guns may kill us at any moment, we choose to trust them not to do so? Even if they have just grievously assaulted us? Of course we wouldn’t want to do anything that would aggravate the situation.

The good news is that you do not have to be a defenceless victim. I have written extensively before about ordinary people triumphing against overwhelming odds. The bad news is that it requires a fair amount of effort and dedication to properly equip yourself. A gun makes a huge difference in equalising the playing field between you and your assailants. But there is an infinitely more important element you need to understand: your mindset.

Yes, your physical fitness is important. As is being proficient with an array of defensive tools and carrying them on your person. Additionally, it also helps if you know a martial art of some kind. However, without the right mindset none of these things will be of use to you. You must be mentally prepared to use whatever methods at your disposal to fend off a violent attack. There is a fair amount of literature out there regarding this topic, but I will start you off with this one from the Personal Defense Network.

The point is that you can turn yourself into a hard target: you don’t have to be a victim.

The people who suffered this attack were lucky. I guess. They got beaten up, held at gunpoint, and robbed. They suffered incredible emotional and physical trauma at the hands of violent criminal scumbags. The scars of that night will stay with them a long while still.

The reason they entrusted their lives to violent criminals is because they didn’t really have a choice.

They had a couple of drinks and their situational awareness was nonexistent. Apart from the alcohol in their bloodstream, it was early in the morning: it was dark and they suffered impaired visibility. And they probably experienced fatigue as well. Then six armed robbers caught them completely off-guard, and you know the rest. Considering the state they were in, I doubt they were capable of anything resembling competent resistance.

Criminals aren’t stupid after all: they pick their victims and location so that their risk exposure is minimal.

But what if the victims were all trained, armed, in an elevated state of situational awareness, and equipped with the appropriate mindset? Yes, the criminals still outnumbered them six-to-four, but those aren’t particularly bad odds. I will wager that the outcome would have been vastly different.

I suppose fighting back doesn’t sound so irrational now, does it?

Yes, there are no guarantees in life. Especially so in violent encounters with dangerous criminals. At the end of the day the responsibility (and accountability) of every decision you make is yours, and yours alone. I am not here to judge your decisions and lambaste you. To the contrary, I merely want to present a different perspective. Perhaps you agree with me, perhaps you do not.

The choice is yours.

If I somehow convinced you to begin your journey from conditioned victimhood to becoming a hard target, congratulations! There is a wealth of information on this website to get you started, and I will post suitable links below.

I hope you find them helpful.

Situational Awareness is your… 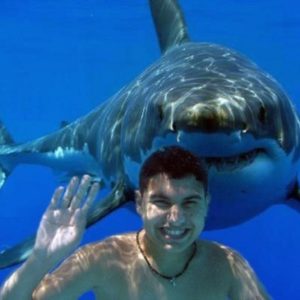 Situational Awareness is your best survival tool - learn to use it 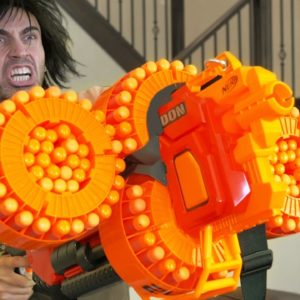