Referring to physical fitness, how prepared are you to fight? And fight as if your life depends on it? Because it just might.

Let me run three scenarios to illustrate what I mean.

If you found yourself stuck in the local mall with an active robbery or shooting in progress – are you fit enough to run away? Can you run up the flight of stairs next to the escalator? And can you do so while carrying your 3-year-old daughter?

Or if attackers box your vehicle in during a hijacking, and you need to exit the car to engage – can you get out quickly? Or are you going to get stuck because your beer belly (I have one as well) gets in the way? Can you run behind your vehicle and drop to one knee quickly to take cover?

Lastly, let’s say you sprinted to cover. Are you going to be able to shoot straight? Or is the run going to gas you so hard that you can’t focus and achieve accurate hits on target?

The topic of physical fitness recently came up in Dave Spaulding’s Blog (Handgun Combatives), and I realised that gun owners often neglect their fitness levels. We focus so much on the gun that we forget fighting is not a static activity.

The military makes such a big deal of physical fitness because fighting is a highly exerting. The fitter you are, the harder you are to kill. By not possessing a basic level of fitness, you are making yourself an easier target. Your attacker will outpace, outrun, out-punch you. And ultimately kill you. Chances are you will go up against a younger, stronger guy with nothing to lose. So put down that cheesegriller pie, and let reality sink in for a moment.

Now, before you stone me to death, when I refer to fitness I do not imply you need to be superhuman and able to leap buildings in a single bound. Or Hulk-slam criminals through a drywall. Speaking for myself; I have zero chance of being a Men’s Health cover model. I like braaibroodjies, beer and the odd Cuban cigar too much. And I stand by my statement that being slightly…er…chubbier…makes you harder to kidnap.

However, I’m in my 30s with two operations behind me due to injuries. I can run 5 kilometres without stopping to search for my lungs, climb a rope, and move a decent amount of heavy weights. A few times a week I go to the Brazilian Jiu Jitsu dojo to train and spar against guys actively trying to choke me out. Many of the club members are on the wrong side of 45 and still manage to keep up with the youngsters. In fact, they put some youngsters like me (don’t let the gray hair fool you) to shame.

A couple of years ago, when I started my journey into being fitter and being able to fight, I learned a valuable lesson early: fighting makes you tired. It is one of the most humbling things you can do. If you think I’m lying, try this challenge on for size; find a buddy of similar size, and have your wife time you. Then wrestle with him for 2 minutes flat-out. Have him sit on top of you, and try to throw him off. Alternatively, get some gloves and spar with each other for 2 minutes. When you are done, sit and think how that would feel if the other guy was actively trying to kill you.

Trust me, I know all the excuses. Because I use them myself far too often. I don’t have the time. Or the money. I’m just not in the mood today. And I’m too old, or too tired, or too busy. Or whatever else you want to put in here. It’s all bullshit – we’re not fooling anybody. Cue the butthurt. Granted, some people may very well have legitimate medical conditions. I underwent an operation myself this year, and it took me out of action for a few weeks. But now that I have recovered, I’m back at it full-speed ahead. While we are sitting on our arses thinking up nonsense excuses, a 19-year-old career criminal is looking for his next victim. Do you really want to increase your chances of dying because you couldn’t even throw a proper punch, or climb over a 6ft fence? How stupid would that be?

There will always be an excuse for why you can’t do something. But the next time you are making up reasons to stay on the couch instead of going for that run, keep this in mind; Derek Weida, a US military veteran, lost his leg but is an active CrossFit competitor. A local trainer I hugely respect had a guy in a wheelchair attend his course this weekend. In our BJJ class a close personal friend of mine competes despite being in his mid-40s and having a pacemaker. He does park runs every weekend, and out-rolls guys half his age.

In my opinion, you need to achieve a balanced level of fitness. A bit of cardio with some resistance work, and a little bit of flexibility. Be a jack-of-all-trades, but a master of none. I try to vary what I do every day. The only consistent activity lately is my time on the mat. Otherwise it’s jogging, working the heavy bag, or some circuit-type training. I will try anything to keep it interesting. Training doesn’t need to be boring. And you don’t need to spend R1000 a month on a CrossFit membership.

The reality is that your fitness level will not always be the same. Since “life happens”, some days you will struggle and others you will feel like a machine. But don’t screw yourself over and get injured or killed because you didn’t have the basic mobility to climb a 6ft wire fence.

In the words of Dave Spaulding; “Be an active participant in your own rescue.”

During the week Rouen works in the security industry designing integrated security solutions. During his free time he cultivates his tactical beard, causes butthurt amongst liberals, and helps to run an IDPA club 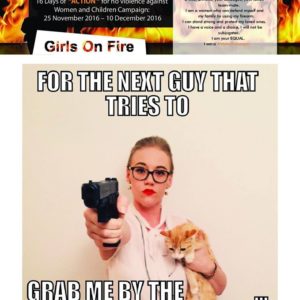