Herewith is the analysis regarding the expired licence saga from the Foundation for the Defence of Democracy, the GOSA legal team.

On Thursday 7 June 2018, the Constitutional Court handed down judgment in the case between the Minister of Safety and Security and the South African Hunters and Game Conservation Association.

The judgement followed the appeal by the Minister against the order of the High Court declaring sections 24 and 28 of the Firearms Control Act unconstitutional.

The High Court found the two provisions to be constitutionally invalid on three grounds:

(2) breaching the right of equality; and

(3) violating the protection of property rights in section 25 of the Constitution.

With respect to irrationality and vagueness it found that there was no “rational nexus between the legislative scheme and the pursuit of a legitimate government purpose that could explain the discrepancies in procedure”, and that the “mere fact that no proper procedure is set out to bring oneself back under a scheme of legality, nor provide for a procedure to surrender a firearm for value or otherwise, points to irrationality and vagueness”. With regard to breaching the right of equality it held that the provisions of the Act violated the equality provisions in the Bill of Rights on the basis that the legislative scheme provided for differential treatment between gun owners protected under the interim order and those who were not.  Lastly, in respect of the violation of section 25, the High Court reasoned that the absence of a proper procedure for surrendering the firearm after the effluxion of the licence period amounted to an arbitrary deprivation of property contrary to the principle set out in FNB, and the absence of a regime for surrendering the firearm for value amounted to a violation of the right to property in terms of section 25. It gave Parliament 18 months within which to cure the defect and declared all firearm licences which are or were to be renewed in terms of section 24 to be deemed valid until this Court’s final determination of the constitutional validity of the sections.

The Constitutional Court dismissed the finding of the High Court and confirmed the validity of the legislation.

The judgment, however, is disturbing in its ideological bent, and ham-fisted attempt to make silk from a pig’s ear.

Metaphors aside, the unanimous judgment is contradictory and offensive of basic principles of civil liberty. This judgment should be of grave concern to legal scholars and has the potential to create a constitutional crisis where the Constitutional Court loses its legitimacy and has to resort to force of arms to enforce its views and not rely, as it should, on the consent of the people.

The opening two sentences by Froneman J sets out the ideological starting point for the Constitutional Court, to whit:

“(g)un ownership is not a fundamental right under our Bill of Rights.  It is a privilege regulated by law, under the Firearms Control Act (Act).”

Firstly, South Africa does not have local equivalent of the Second Amendment as found in the Constitution of the United States. On that technical point, the Court is correct.

However, the ability to own property, any property, is a most basic function of inherent human liberty and dignity. One’s own choices in life cannot be seen as a “privilege” to be granted and removed by fiat. To call the ownership of a thing a “privilege” is offensive at grassroots level.

The regulation of people’s individual choices is invasion by the executive, an invasion to be resisted save in the most critical of cases. By calling the ownership of firearms a privilege, the Constitutional Court, for all its bluster and lecturing, has failed at the first hurdle.

When the starting point for a position is unsupportable, enforcing same will require legal gymnastics to divert attention away from the fundamental flaw and confuse the reader with technicalities. That is what has happened in this case.

The challenge to the sections of the Act were, simply put, an attempt to put right the manifest injustice inherent in the Act where a person’s licence has expired by effluxion of time because they did not apply for re-licencing before it expired, or once 90 days prior to the expiry date has passed. So a person may apply for a licence with 89 days to go, and won’t know if her licence is approved in time until it is too late.

Regardless, once the licence has expired, the person is now guilty of an offence by possessing an unlicensed firearm, which carries a maximum sentence of 10 years in jail.

10 years in jail for being forgetful.

I must point out that Froneman does not footnote this number, or refer to it.

The failure to re-licence hasn’t changed the material circumstances of the person or the firearm. That person is not running around committing crimes, has not become a danger to society overnight, and the firearm is perhaps simply sitting in a safe doing what inanimate objects do: nothing.

Treating law-abiding people with a crushing criminal conviction for forgetting to renew a licence – which is a beureaucratic function – and without any form of mens rea (criminal intent), in the same way as a convicted rapist is, to the average obsever, an injustice so manifest it could not be countenanced. Sure, the licensing is late but, like a vehicle licence, pay the fine and keep on trucking.

What could be so difficult about that?

Everything if your ideology is against civilian firearm ownership, and Froneman’s judgement displays the contempt the Constitutional Court is willing to show towards the most law-abiding sector of society, the firearm owner.

I say this because, in order to own one, a person is subjected to criminal background checks, investigations into character, inspections at home and so on.

So why on earth treat these people, who have undergone all this stress to own, as hardened criminals if they are forgetful in their paperwork?

Froneman’s attempts are shown up by the intense contradictions in paragraphs 16 to 20 of his judgment.

On vagueness Froneman finds that the Act “cannot be clearer.  It is an offence to possess a firearm without a licence obtained in terms of the Act.  Once one has obtained a licence one needs to renew it at least 90 days before the date of expiry.  If that is done timeously the licence remains valid until the application is decided.  If that is not done the licence terminates and possession of the firearm constitutes an offence and is subject to criminal penalties.”

It would appear the failure to challenge the constitutionality of the criminalization of the failure to renew is the door through which Froneman walks.

Froneman states that irrationality or vagueness must be found elsewhere. He found that SA Hunters’ attempt to use the consequences: “that gun-holders would not, after termination of the licence upon effluxion of time: (i) have any lawful means to dispose of the firearm; (ii) know what the consequences of the lapsed licence will be, and (iii) know what to do in those circumstances” failed.

The answer, according to Froneman, was that the owner must simply “get rid of the firearm.”

SA Hunters’ argument that the owner cannot do so lawfully because she is guilty of a crime once the licence has lapsed was dismissed in a rather strange fashion by Froneman:

“But goes the argument, he cannot do so lawfully because he immediately becomes guilty of a crime when the licence has lapsed.  But this consequence, even if correct (which it is not), is not vague or uncertain, or irrational in terms of the end sought.  The gun-owner knows that he must either apply in time for renewal or dispose of the firearm before expiry.  If he does not, he will be guilty of an offence.  He knows what is expected of him before expiry of the licence and is provided with legislative means to fulfil that expectation.  He also knows what will happen to him if he does not do so.  The rule of law requirements of clarity and certainty are clearly met.”

Having just stated that the legislation could not be clearer, Froneman states that the consequence is not. Froneman appears to be referring to the 60-day disposal period to malke this claim. Once a firearm is no longer legally licenced, the owner has 60 days to dispose of it or be guilty of an offence. But you cannot legally dispose (sell or give away) an unlicensed firearm without being guilty of an offence.

Froneman “can see no legal obstacle to handing the firearm over to the police after termination.  The fear that the gun-owner may be liable for prosecution if he takes steps to hand over the unlicensed firearm to the police is over-stated. [Despite having stated the law is clear on this very point] If that is the intention, it is difficult to imagine how it can be said that the gun-owner can be guilty of unlawful possession of the firearm.  Our Constitution will not countenance that strictest form of strict liability.”

Froneman refers to S v Singo in support of his judgement. Briefly, S v Singo dealt with the constitutionality of the reverse onus on an accused which forced him to adduce evidence to prove he was not guilty of an alleged offence. However, Froneman sidesteps the obvious issue – the mere handing in of a firearm for which the licence has expired and the owner has not disposed of within 60 days (but you can’t sell an unlicensed firearm, that’s also an offence, but Froneman ignored that too) is an admission of a crime.

Froneman’s attempts to assuage the populous with this paragraph should not be accepted, because it is not based on a proper reading of the legislation as it stands. It is simply incorrect and intentionally ignores the circumstances presented to him in the pleadings and in argument.

Froneman dismisses the fact that the firearm must be lost, since the police do not have the competency to hold it in safe custody, and refers it to Section 25, deprivation of property. Later though, he destroys this right by stating that “relinquishing some incidents of ownership in potentially life-threatening firearms is not too great a price to pay for one of the purposes of the Act, enhancing the constitutional rights to life and bodily integrity.”

With respect to equality, Froneman finds that, since the cause of the firearm becoming unlawful is the failure by the owner to apply for a new licence in time it is not an administrative act, and thus the fact that those who are stripped of licences by the Registrar are not the same as those who have let their licence lapse.

The fact that the owner cannot make representations to the Registrar bring herself back within the law is held to be justified and that there is a rational differentiation between the different categories and therefore not unfair. 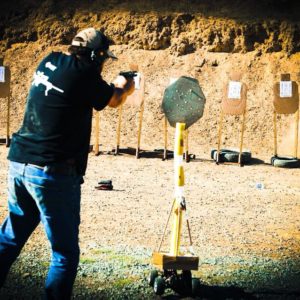