Craig’s previous article along this line ran almost a year ago. It turns out that the our views at the time were nearly prophetic. With the leak of proposed amendments to the FCA last week, this is a piece of writing that really hits home. As always with Craig’s writing, I did minimal editing and kept it as raw as he intended it to be. He originally wrote this in April 2017, and asked me to wait for the right time to publish it. Now is as good as any.

In a previous article I wrote about Trust Broken.

Essentially it boils down to this – the powers-that-be continually negotiate in bad faith, and with ill intent, in order to advance the civil-disarmament agenda.

If this entails taking a few steps back for them before going forward, then so be it. They have time and resources on their side. Essentially it is a tactic taken out the Marxist playbook – compromise only to ensure that in the long-term you achieve your goal.

Again, the long-term goal is eradication of firearms in private ownership. If things continue as they are, who knows where we will be in 100 years. So, the fight is as much for the short-term as it is for our children and our great-grandchildren.

There was a time when the state trusted us (except for the politically disenfranchised – Ed), and one could simply approach a magistrate for a licence. Schools trained children how to shoot and hosted competitions. This happened during the life-time of many of our elders.

However, this has been taken away from us. The state no longer trusts gun owners. I mentioned previously that if you have to negotiate for something you already have, then you have already lost it.

The system we ought to have

How did we go from approaching a magistrate for a licence, having shooting sports at schools, and life-long gun licences  to where we are today?

What then should our negotiation objectives be?

Those negotiating on our behalf should insist on a no-licence system for all firearms. Anyone who has the money should be able to purchase a firearm subject to a few reasonable restrictions based on age and maturity. Furthermore, there shouldn’t be a database of firearms in private hands.

If you baulk at this statement, then perhaps it is a sign how insidious and poisoned we have collectively become to the notion that good, free men and women should take responsibility for themselves. The law by definition does not apply to law-breakers as they will simply ignore it.

Again, those negotiating on our behalf should insist on a no-licence system, and that the firearms database be scrapped.

The need to replace a broken system

Why should this be our starting point? Simply this – we have entrusted those in power to make laws that would be for the common good of society and the individual.

Time has repeatedly proven that Parliament cannot be trusted to do so. They have repeatedly betrayed our trust with increasingly restrictive legislation, or by creating a system of regulations and inefficient processes that add needless expense to firearm licensing.

In the end it has not prevented or reduced crime. It has however been used to inexcusably complicate the lives of ordinary law-abiding citizens. The government and its agencies regularly do not even abide by the very laws and regulations that they themselves have promulgated. Even worse are the numerous times when police officers have been caught selling firearms to criminals. (And worse than that are the incidents we don’t even know about – Ed)

We negotiated our rights away for the illusion of safety

Some in our firearm-owning community would argue that they have negotiated a pretty good deal for us. The reason being that we can get most of the guns we want as long as we comply with a few legal conditions.

The idea is that we have been ring-fenced by laws which will protect us. This is akin to a laager or fortress mentality. The law encircles us, and as long as we behave nicely like good subjects we will be safe. You know, the law will protect us. Do we really have to trust Parliament again?

This trust has been broken repeatedly. In the near-future a new set of negotiations will begin. Either because a new president or minister has been appointed, or because they need to prove that they are “serious about crime”. And this will create the appearance of doing something for the electorate.

In fact, given the tumultuous events of the past week (April 2017) and the re-shuffling of cabinet, I predict that the new minister of police will do just that.

So, do not be complacent. Our so-called fortress of safety is actually a ghetto into which law-abiding citizens have been legally herded into and ostracised by greater society. The latter by means of emotionally-appealing disinformation campaigns that lack any foundation in rationality.

However, our negotiators will also need to make it clear to the authorities that they are not bluffing. They need to back themselves with concrete actions. The state backs itself with the justice system and security forces. Ultimately all government power comes from the barrel of a gun.

If you do not agree, I suggest you try to stop paying your taxes and see if the state sends rainbow-coloured unicorns and fairies to chat with you.

If you think I am joking about unrestricted firearms ownership or deleting the CFR – I am not.

There is a principle called subsidisation, where the decision-making processes are devolved to the lowest possible level. This ensures that those about whom the decisions are being made actually have input and are more likely to cooperate. In other words, we know what is best for ourselves and our negotiators should be insisting on it.

On the flip-side, if our negotiators cannot get their way then they must be capable of bringing meaningful pressure to bear. Initially this can range from threats of non-compliance with such stupid concepts of relicencing (which already kind of happened unintentionally on a large scale! – Ed) or passive resistance by all gun owners by applying on the same day for their renewals. Taking it to the next level would be the burning of our licences.

This has been done in our country before. Remember the opposition to the pass laws and how they were resisted? For many of us this is an alien way of thinking. Resisting the government by means of passive acts makes us uncomfortable. And the majority of gun owners are above reproach when it comes to obeying laws.

Indeed gun owners own property and generally work hard. And if statistics are to be believed we are the most law-abiding sector of society. The authorities have our names, numbers and addresses because we gave it to them. So the state can intimidate us by raiding those individuals who are resisting. It is a reality that we will have to face. Those individuals would have much to lose if they stood on their own.

We need to change the way we think

I sincerely hope this never comes to pass. But if we continue on our present trajectory, where will we be in 25, or 50, or 100 years?

However, times are changing and folks are getting irritated with endless laws and betrayals by the authorities.

So, start to decolonise your mind of the alien concept that all guns have to be licensed, your safe must be inspected, and that we need a firearms registry. Think of how much time and money we can save, and the resources it releases for the police to actually do their job. You know, like catching the bad guys instead of waiting for a good guy to fail to submit the correct form on the correct date.

To those negotiating on our behalf – start insisting that firearm licencing and the CFR be scrapped. It’s a radical starting point, but it’s about time Parliament understood that gun owners are gatvol.

Craig is the owner of Tactical Quarter Master (TacQM), and does a regular podcast on Gunsite Radio called “Shootin’ the Breeze with Camouflage762”. 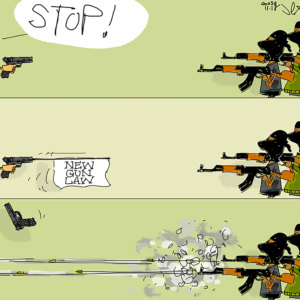 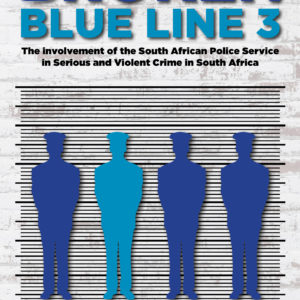