I’ve kept this page free of politics for a long time. But there are things going on at the moment which I feel warrant exposure and concerned attention no matter where you stand on the spectrum, as these things will affect you personally.

I find it a highly dangerous situation where a politician in our current climate is making repeated overtures for civilian disarmament. In a word, the Police Minister is saying that South Africans should not be allowed to possess firearms for self-defence. Why is this dangerous? Much of that will be covered below, but essentially it needs to be realised that no matter whether you own firearms, or have never fired a gun, when a politician who is ultimately charged with the protection of his citizens makes these statements, there is a deep and dark agenda at play.

Mr. Minister is escorted around the country in armoured limousines, with around twenty armed and trained police officers as protection, and lives in gated and fortified homes with more armed security surrounding him at taxpayer’s expense. He is not living in a house in, say, Milnerton, Pinetown, Heidelberg or any regular suburb. The fact that he, for the rest of his life, will be protected and pampered like a demigod while every other regular person runs the gauntlet of carjackers, house robbers, muggers and goodness knows what else. All while he wishes us to be denied the ability to lawfully protect our lives, and those of our families, is nothing short of moral corruption.

It is no secret – the police and security services in our country are too woefully understocked to be able to attend every violent crime happening. Nor are they able to have a “Bobby” on every corner to show force and prevent violent crime. Even double the number of vehicles on the road will not prevent violent criminals from committing violent crime. With all the love and respect to my friends and colleagues, we simply cannot get to every incident in 10 seconds flat. The fact of the matter, and this is accepted and upheld by many mature individuals, is that you are your own first line of defence. See, unlike the minister, you don’t have bodyguards 24-hours a day. You are not surrounded by armed policemen ready to take on anyone who tries to relieve you of your hard-earned property or life. There are not, and will never be, in any utopia, enough police or security to personally protect every citizen. You are it until backup arrives.

I’m no paranoid alarmist, I assure you, but I read a lot. I don’t care if it’s 1720 or 2020 – look at the past and discover what happened after any Socialist or Fascist government disarmed its population. Forget “crime” for a second. Why would a government, in a volatile climate of political leaders calling for murder and seizing of land, want a disarmed and defenceless population? Think about that one for a while. As cliché as it is, take all the time you need. But I will remind you of the Minister’s words, “only the military and police” should have guns. Ok now do private security companies and “armed” response companies now fall into “no guns in civilian hands”? Exactly how defenceless would the Minister like us to be?

Firearms owned by civilians are pretty much in relatively competent and safe hands. I certainly don’t need to scour the internet much to dredge up and point out that a massive proportion of firearms used and recovered in crimes are police, military, and…yes – “freedom fighters’” weapons. The AK-47s used currently were not bought by anyone in the last few years, I assure you. These weapons have been cached for a couple generations. The R-4, 5, Z-88 and Uzis haven’t come from civilian collections either. How banning future sales and possession is going to solve current crime committed with current weapons is beyond me. Those highly prized criminals’ firearms will be in circulation for a long time still. And there are many. Preventing Mr. Ndlovu or Naiker or Samuels or Smith from owning a Glock to protect his family because one day it might…just mightbe used by the wrong hands is both paranoid and short-sighted. To try and sell the belief that millions of families will be adequately protected by the current police (and military?) is nothing short of infantile. Read on.

Pun intended. There is a video clip where the SAPS National Commissioner admits that the police are incapable of stemming crime. Again, all respect to my dedicated and brave friends and colleagues. So one boss admits the police can’t do the job, and the other boss basically takes the mandate of the police and crumples it up. Because if we disarm the public, there won’t be any more violent crime. Surely. And having another “amnesty”, don’t you see the criminals lining up at charge offices around the country handing in the tools of their trade? Because they all became Born Again Good Citizens and decided to do an honest day’s work instead. Surely. Basically we are blaming the population for its own woes. If this was the USA, and idiots were shooting up schools and shopping centres every couple weeks, this article may have a different tone. What we have instead is SAPS management saying they can’t do their job to protect you, and you shouldn’t be able to either. So there.

In South Africa, right now, I can go to an outdoor cricket match, drink as much on-tap beer as I can handle, shout abuse, get into a fist fight, fall around the place and generally be a nuisance, and that’s fine. But God help me if I light a cigarette. Oh my word. You would think I had shot the Queen’s prize Corgi. Also in South Africa, the right to life is enshrined in our constitution. One of the spin-offs of that right was the abolition of the death penalty. However, in a burst of good faith, we good people are still privileged to be able to defend our lives with reasonable, proportional and justified force. Someone unlawfully threatens my life, and I may use whatever means necessary to protect it. My right to life is supreme. We already know we cannot rely on a superhero to swing through a window just after three bad guys…with guns…make their entry into my home. The law, Section 49 of the Criminal Procedure Act of 1977, outlines when deadly force may be used. The same Minister is hotly quoted telling his police not to die with their guns in their holsters, and to “shoot to kill”. But what about the rest of us? Should we just die? What makes a policeman’s family (when he is home) more valuable than anyone else’s? What makes his and their life more worthy of protection than any other, under law, in this land? Does the Minister intend rewriting the law?

The Firearms Control Act (2000) was supposed to make things a bit more tricky to buy a firearm. Arguably you have the power of life and death in your hand. However, never in the history of this country have the variety and number of licences been issued to civilians been higher, and yet it is not the same citizens killing each other. I would truly understand if the Minister was announcing a complete reworking of the (failed) licencing and renewal process. I would truly understand if the Minister announced future licence applicants would undergo more stringent background checks, a more thorough competency examination, a psychometric test, a DNA sample, whatever. I would understand if the Minister had to say that only the highest moral and most emotionally stable persons may have this item in their possession. But he hasn’t. OK.

Criminals must be laughing themselves sick when they read the Minister’s calling.

I’m concerned. You should be too. These comments will not die a natural death. You need to approach your political representatives and get written responses from them on their stance on this issue.

*Harold F. Callahan is a police officer with many years of experience, and who will be gracing Paratus with hopefully regular and useful articles pertaining to SAPS-related information and issues. 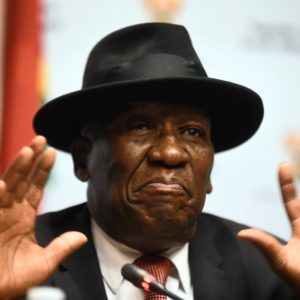