Since this is Part 1 of…I don’t know how many, let’s start this discussion with a fact check: I am not an OAF (Operator As Fuck), nor do I pretend to be one. You will not find me walking around with pineapples under my arms. I am not a savant on all things tactical. But I picked up a thing or two over the years and want to share it with you.

This article will hopefully bring some reality checks home to the people who need it the most. How you react to the tone and content of this is up to you. This will not be a safe space.

First, some background. So we can get cosy as you get to know me better!

Am I qualified to hold my opinion?

I have been in some interesting situations during my career. Ones where I stood my ground and ones where I ran. I entered into unknown homes and buildings alone and as a part of a team, and spent more hours on courses and training than I care to count. If we did care enough to count, we would probably be talking about years’ worth of knowledge and skills development with various weapon types and team-based tactics. No, this does not mean I know what I am talking about; it means I possess somewhat of a well-developed reference framework.

Having had the privilege of working alongside some of the best security and close protection operators in SA (and on some very polished and slick teams), I know a little about the inner workings of the security industry and its tools. As well as the benefits and pitfalls of most of them.

Especially when it comes to gear overload.

When it comes to gear – less is definitely more

No one ever told me I needed more gear. They usually said the complete opposite. I bolted on everything I thought I needed when I was just starting out. Heck, I even carried spares for everything I had. I resembled a walking shop display and was about as mobile as one.

Of course, the only person I was impressing was myself and Joe Public, who did not know any better. If it was tacticool, I was probably wearing it. The walking Rambo montage may have looked impressive, but it was not practical.

I very quickly learnt that less was definitely more. As a civilian, this is something worth keeping in mind when designing your defensive toolbox. You need to actually sit and apply your mind (or, as we like to call it – think!) to what you realistically need. This means understanding the context of what you are trying to achieve (or, as we like to call it – your mission!).

What is vital for protecting your family if the SHTF? And what do you need on standby in the event of sustained civil unrest, as unlikely as it is? Most importantly – what do you need just to deal with every day? Covering all the bases in one article is impossible, so I will focus on one piece of gear in each part.

Buying gear without context is wasting your money

We have been caught in this gear-based “revolution” since the early-2000s. Probably since even before then, in fact. The shtick is that you will miraculously become proficient with the gear you buy. Which is complete nonsense. Most people could not be bothered to dry fire for 5 minutes a day. Let alone burn through fifty rounds (a pathetic amount) at the range every week. But people tell me they are going to train with all the fancy gear they buy? No way that’s going to happen. That stuff is going to go into a cupboard and collect mould.

I get that we all have equal access to the Internet, and hence all opinions get airtime. Especially if it has decent production value. But the loudest voices in the gear debate usually lack relevant experience, understanding, and contextual knowledge. The people who actually possess genuine contextual knowledge tend to keep quiet online. And many of them have experience far superior to my own. I hope they chip in their two cents’ worth and correct me if I get something wrong.

The Truth about Body Armour

Do you want to look cool? Like high-speed-low-drag DEVGRU-meets-SFOD cool? Then you need a plate carrier!

But seriously, here is the honest truth. For a civilian, overt tactical gear is a waste of money. (Yes, this is a grossly generalised statement).

Plate carriers inherently have several significant drawbacks that people outright ignore. I’m keeping this simple and to three points only.

1. Overt Gear Makes you a Target

Firstly, overt gear makes you a target. It is kind of difficult to not stand out while wearing these things: it isn’t exactly subtle. And it wasn’t designed to be. Tactical teams don’t care if they stand out or attract attention: they are operating overtly with all their gear in plain sight. They have a specific mission and purpose and are kitted out to fulfil said purpose by operating in a team. Meaning there is a whole group of them, and they are well aware of the mission-specific risk profile.

You will not be operating in a team. Even when things go horribly sideways, you will likely spend most of your daily traverse on your ace. This means attracting attention makes you stand out and turns you into a target. More specifically, you are a target that advertises you have cool stuff on you. Or, as a mate of mine calls it, an “epic loot drop”.

Secondly, body armour impairs your movement. “It will only take like 3 seconds to throw it on”. Yeah, I hear this all the time. All kitted out with an IFAK, spare magazines, zip cuffs, TQs, torch, and a spare blade. (And don’t forget the chem lights…do these people parading their plate carriers with chemlights even know what they are for?)

Now try wearing that for longer than it takes you to film a short video or make a coffee. How is your mobility with all of that on? A plate carrier minus add-ons will weigh around 6 to 7 kgs. Add some basics, and very quickly you have 10 kgs hanging on your shoulders and pressing you from the front and behind. It’s not going to be comfortable. You are not going to be able to move quickly or nimbly. And merely getting out of your vehicle (or moving through a doorway) suddenly becomes a lot more complicated.

All that gear can get you entangled in the environment. If you are operating in a team it still sucks, but someone is likely there to cover you or assist you while you unfu-…get it sorted out. Getting shot at while hung up in your vehicle because of your gear is a quick way to get dead.

I am curious how often people holding strong opinions about plate carriers train in them. Do they wear them several hours each day to become totally familiar with moving in them? My guess would be hard no.

Lastly, body armour is never guaranteed to save your life. Professional security and law enforcement personnel in full wraparound body armour (and plates) get killed in our country nearly every week. If someone nails you dead-centre on a Level IV standalone plate with a rifle of any calibre, you won’t be OK afterwards. Sure you probably won’t be dead, but will likely be cut up with spalling and definitely have the wind knocked out of you. If you are lucky. If you are unlucky you may have a pneumothorax (look it up, it’s fun!) or experience a plate failure. Meaning the bullet is now inside your chest cavity.

A far better outcome, is to not get shot in the first place. Which means completely avoiding situations where you are likely to get shot at. And if you cannot avoid or evade, then at least be highly proficient at moving to cover and effectively using it. Do you even know what constitutes cover? Because a lot of things people think are bullet proof totally aren’t. (Another article for you, Gideon. Thank me later.)

Think about what body armour is relevant to your situation

Despite everything above, body armour is not a bad idea. But do yourself a favour and consider something that realistically fits your context. Like concealable soft armour. You can hide it under a shirt and it doesn’t weigh a ton or limit your movement. And no one will notice it by just glancing at you. Also, it too can be donned in 3 seconds and be worn outside your shirt – making you look awesome and giving you confidence. But you are far more likely to use it, and it is definitely a more practical solution.

Level IIIA soft armour will stop just about all common handgun calibres. This is in line with what you can expect to be coming your way during a house robbery. If you are worried about a squad with AKs breaking through your door, you have the kind of problems hard armour isn’t going to solve anyway.

A massive benefit of concealable soft armour is that it is possible to carry a concealed handgun. This means you don’t have to change your carry position or open carry your firearm. Open carry is not a problem for registered and uniformed security personnel. But an ordinary civilian is putting themselves at risk of unwanted run-ins with the law if they do so.

Having the police arrest you and/or confiscate your gun just when the SHTF doesn’t sound like fun to me. Or particularly clever. And nor does getting shot in the back of the head by criminals out looking for easy targets.

Intervening in situations you don’t understand will get you dead

“But what about if I am responding to a crime in progress? I obviously need hard armour for that!”

Excuse me, but are you law enforcement? Do you have a mandate (or even skillset) to back these delusions of grandeur? Nobody, as a civilian, should be planning to do house penetrations and clear their neighbours’ houses. Cross this off your list if you want to see another day. Chances are solid that you’re not going to make it if you encounter a threat inside their home. If you fancy your chances against multiple attackers in a confined space they control while going in blind – good luck. I hope your life insurance premiums are paid so that your family at least gets something out of it.

(I am not even going to open the can of worms of what will happen to you if you misidentify a target or shoot an innocent person. I’ll leave that to Gideon for his next article.)

There is a good reason why most armed response companies have SOPs preventing their response officers from clearing homes (entering) on confirmation of a positive threat. They are protecting their people because even those pen-pushers know better. This is why I take opinions from people who have never worked in this industry, and clearly do not understand the risk profiles, with spades of salt.

If you want to own body armour, then understand what you need it for. And contextualise that purpose realistically – not according to what people on the Internet tell you. If you are prepping for sustained civil unrest, and are concerned about moving around outside – then think about what such an event entails. Hint: it doesn’t mean gearing up like Marcus Luttrell in Lone Survivor (remember how that worked out for him?)

Be realistic. Understand the constraints you are working within. And drop the gung-ho. 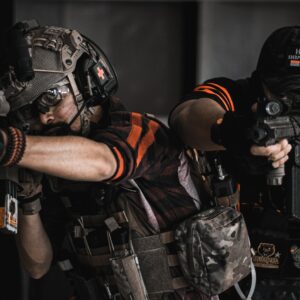