Upon reading Helen Walne’s assertions that shooting sports have no place as an Olympic event, I was fairly astonished. She correctly mentions that shooting has been part of every Summer Olympic Games since their inception in 1896. Sadly the rest of her opinion piece falls rather short of contextualised fact and reason, and she makes numerous wildly inaccurate claims and discourteous accusations regarding sport shooting and its practitioners. Needless to say its contents caused more than a little umbrage among members of the sport shooting community.

Ms. Walne mentions that, according to her, shooting is an anomaly requiring little physical strength, and relying instead on accuracy and intellect. While the latter two attributes are certainly part and parcel of what it takes to be a successful sport shooter, physical condition plays a very important role in insuring said accuracy. A fundamental aspect of accurate shooting is steadiness of hand and body. Ability to achieve this required steadiness is a product of cardiovascular fitness, since uncontrolled heartrate and breathing have devastating effects on accuracy (especially in a highly competitive environment such as the Olympics). Physical strength is of course highly important as well, as anyone who has handled a firearm will confirm.

The piece then continues to draw a brief parallel with archery, another long-practiced Summer Olympics event, but states “unless you live in a trailer park in Arizona, murderers do not generally wander around picking off victims with a bow and arrow. But guns? They’re the world’s go-to killing machine.”

The issue, it seems, is that Ms. Walne associates the very existence of firearms with the propagation of violence, and she chooses to compare the practitioners of shooting sports with murderers. This is disingenuous and erroneous.

Fencing only became a pure sport form in 1880 when the first regularised fencing competition was held at the Grand Military Tournament and Assault at Arms, at the Royal Agricultural Hall in Islington. It has subsequently featured as an event at the first Olympic Games, and has been with us ever since.

Depending upon which source you choose, between 85,1% and 50,5% of all homicides in South Africa are committed by use of sharp objects. It would in this context therefore make infinitely more sense for Ms. Walne to be affronted and concerned by the inclusion of fencing as an Olympic sport than by the inclusion of shooting disciplines. Swords are after all rather sharp, and until the 1850s they were regularly used in armed combat. I am confident to say that in their 5000-year history swords have shed a great deal of blood. Of course it is clear that fencing does not fill Ms. Walne with a sense of trepidation and dread, and it should not: fencing is a perfectly legitimate sporting contest with a long and celebrated history. Just like the shooting sport disciplines Ms. Walne so derides.

Now, Ms. Walne quoted numerous statistics pertaining to so-called gun violence, but failed to provide any context or additional information. She says that 13 286 people were killed in the US by use of guns, but fails to clarify that the United States is a country of more than 319 million people (as per census data from 2014), and that the vast majority of these homicides can be contained to six US cities: Detroit, Flint, New Orleans, Birmingham, Richmond, and Washington DC. Gun violence in the US has also declined massively since 1993, but Ms. Walne fails to mention this. Instead she chooses to make vague reference to social problems in the US, which are mentioned only in an attempt to connect gun violence to race and class divides.

Crime and violence indeed have complex origins and causes, but none of these are even briefly alluded to, and Ms. Walne prefers to indulge in misguided virtue signalling as opposed to genuinely exploring the multitude of facets to the complicated problem.

It is patently clear that Helen Walne has never participated in shooting sports, nor has she bothered to even research it. Had she done so, then I suspect I would not be obligated to fill in the blanks. She remarks that the participant whom she was viewing on television had a “cold look in his eyes”, and that the “man peering down the length of a rifle was making me feel unsafe”. Now admittedly I was not watching the event observed by Ms. Walne, but is it not likely that the so-called “cold look in his eyes” was rather an expression of intense focus? The gentleman in question was, after all, competing for an Olympic gold medal. If ever a sportsman or woman finds themselves in a situation of intense focus and concentration, it would definitely be when competing in the Olympics.

By drawing parallels between a focused athlete and a cold-blooded murderer Ms. Walne levels a grievous insult at the many dedicated and talented practitioners of competitive sport shooting worldwide. They become the whipping boys (and girls) for the deviant behaviour of murderous criminals with whom they have nothing in common, because Ms. Walne felt like it.

As to her “feeling unsafe” because of the mere observation of an Olympic sport shooting participant on television, I frankly find myself dumbfounded. I am unable to fathom how seeing an Olympian participating in a sport shooting event several thousand kilometres away on your television can make any reasonable person feel unsafe or threatened.

Lastly, guns are most certainly not the world’s “go-to killing machine”: that dubious honour instead goes to cruise missiles, drones, artillery, and bombs. I do not expect to see any of those debut as an Olympic event any time soon. 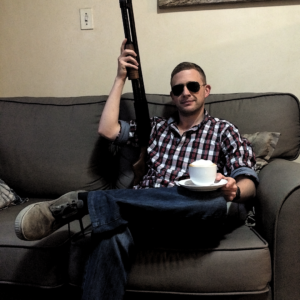