American gun rights and the ceaseless debate surrounding them are an impenetrable mystery for many South Africans. Most of us simply do not understand how the Second Amendment works. Even fewer have a meaningful grasp of its rich history. Needless to say, that doesn’t stop us from holding particularly strong opinions about Americans and their gun rights (although I hear the phrase “gun obsession” often), and then making those opinions heard. All while we don’t have a clue about what we are even talking about. Fortunately, we need not be ignorant any longer. Our salvation comes in the form of Dana Loesch’s superb book, Hands Off My Gun.

Even though the book’s subject matter pertains to the fight to protect Americans’ right to keep and bear arms, there are many interesting overlaps with the South African firearm rights debate. Dishonest politicians and billionaire-funded NGOs (masquerading as grassroots organisations) who seek to deprive you of your firearm rights is definitely not unique to the USA. Hands Off My Gun is divided into 12 chapters, spanning 273 pages (excluding references). So it can be quickly and repeatedly devoured and scoured for facts as needed.

Early on you will be introduced to the so-called Tragedy Caucus (their motto – “Never let a good crisis go to waste”). These repugnant politicians (such as Dianne Feinstein and Rahm Emanuel) not only politicise disasters and manipulate the media narrative to advance their agenda: they outright lie. Add people like Michael Bloomberg to the list, who pumped millions of dollars into abortive anti-gun initiatives like Mayors Against Illegal Guns and Everytown for Gun Safety, and you have a veritable rogues gallery of rich and connected people who seek to deprive ordinary citizens of their gun rights.

Ms. Loesch takes you on a guided-tour of this Rogues Gallery. She illuminates the methods and means used by them to craft a false narrative. She also unabashedly highlights the frequent hypocrisy of politicians and “volunteers” who hide behind armed bodyguards (and sometimes their own personal firearm permits) whilst campaigning for the rights of ordinary citizens to be curtailed. An especially disgraceful example being Colorado state senator Evie Hudak, who smugly told rape-survivor Amanda Collins that “statistics aren’t on your side” after Collins expressed desire to defend herself with a concealed weapon on campus. Sound familiar?

Hollywood A-Listers and other celebrities, who are usually the first to virtue signal after a catastrophe, don’t escape unscathed either. Ms. Loesch’s old “sparring partner” Piers Morgan gets more than the odd honourable mention.

Possibly one of the most important chapters in the book for me, was the one pertaining to the racist roots of gun control in the US. It is a particularly shameful chapter of US history, and it reflects immensely poorly on the Democratic Party, who did more to keep guns out of the hands of law-abiding black Americans than any other organisation in history. From the KKK forcibly disarming black Americans (leaving them defenceless and easy prey for a lynching), to the repeated refusal to issue Martin Luther King a Conceal Carry Weapon permit. Before King was assassinated he had attempted multiple times to obtain the aforementioned permit because he feared for his personal safety. Very legitimately, as we now know.

Ironically this trend of Democrats disarming law-abiding black Americans has continued to this day. Chicago and Detroit being two prominent examples of this vile practice.

The book also extensively deals with the history and meaning of the Second Amendment. The 2A (as it is colloquially referred to) has its foundations in the 1689 Declaration of Rights, which guaranteed English subjects the right to bear arms. The conclusion of the American Revolutionary War, and the subsequent process of formulating a United States constitution, necessitated that the rights of citizens to keep and bear arms be protected from any and all future infringement. The need for the Second Amendment’s inclusion into the Bill of Rights was about much more than self-defence and hunting: it was to protect citizens from government overreach and tyranny. A concept as valid today as it was in 1776, although many people appear to have short memories.

Finally, Hands Off My Gun slays a multitude of gun myths and terminology misnomers. To mention but a few, Ms. Loesch explains how so-called mass shootings are far from a uniquely American phenomenon, that between 0.5 to 3 million defensive gun uses occur annually in the US (and are at least as common as offensive uses), and that there is no such thing as an “assault weapon” as described by the media. Additionally, she also rips to shreds claims that gun bans have worked in Australia and the UK, that “gun show loopholes” exist, and that the US has insufficient firearm legislation.

Hands Off My Gun is essential reading for anyone who wants to learn the truth about the US gun rights debate. It’s matter-of-fact tone and unabashed keenness to confront half-truths and blatant lies head-on is as refreshing as it is illuminating. Because it is written from a female perspective, the book reframes and refocuses the age-old debate in a manner that was sadly very much overdue. We are long past the days where guns and gun rights were the sole domain of men, and as more women take-up guns for self-defence and sporting purposes each year, those views have become truly obsolete.

If you want to argue about gun rights, especially the ones in the US, and you have not read this book, you are doing yourself a grave disservice.

You can order Hands Off My Gun via Amazon. You can also follow Dana Loesch, and her husband Chris, on Twitter.

How the SAPS should… 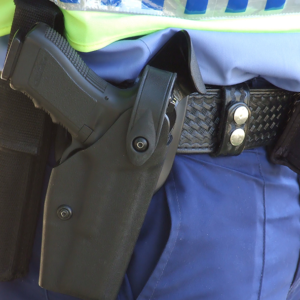