I was contacted by a journalist from the Sunday Times last week regarding a story they wanted to run in that Sunday’s edition of the paper. Obviously it dealt with firearm ownership and so-called gun violence in South Africa. I had a very fruitful discussion with the journalist, Aron Hyman, who was writing the “gun lobby” side of the article. His colleague, Tanya Farber, was supposedly doing the pro-gun control part of it. In any event, I was not the first “gun lobby” person he had interviewed that day, and I got the impression that we had succeeded in slaying quite a few pervasive myths Aron was himself suspicious of.

Unfortunately come Sunday, it was patently obvious which side of the debate the editor favoured. The 20-minute discussion I had with Aron was reduced to three sentences. Absolutely nothing of value or importance was printed, bar a single common-sense soundbite. When speaking with Alan Martheze, one of the other gun owners interviewed, he informed me that his substantial inputs have been similarly butchered to irrelevance.

In contrast, the rest of the article ran a debunked and academically fraudulent study conclusion by Gun-Free South Africa (which I will deal with shortly), and essentially served to force-feed deceitful propaganda to their readers.

This is a shocking perversion of journalism.

This is beyond being merely unprofessional and incompetent. It is deceitful and disgraceful conduct typically associated with the worst kind of gossip newspapers.

Then again, what else did we expect from the Sunday Times? The same newspaper who disgraced their name when they ran the invented pro-Zuma propaganda story pertaining to the fictional SARS “Rogue Unit”, so-doing destroying the careers of dedicated and honest civil servants in the process. And then failing to retract the story after it was proven to be the worst kind of fake news. The same newspaper, not content with irreparably defiling their own reputation with fake propaganda once, then proceeded to publish yet another unsubstantiated and career-destroying fabrication about the so-called “Cato Manor Death Squad”.

Fortunately for those of us who care about things like journalistic integrity, the truth, and open debate (things which appear entirely beyond the capacity of the Sunday Times and its staff), forensic investigator Paul O’Sullivan has now placed the publication in his sights. He accuses the Sunday Times of aiding state capture, and of perpetrating “cheque-book journalism”. I concur, and I wish Mr. O’Sullivan all the best on his hunt. I hope he succeeds in closing this gutter rag down once and for all, and in the process do the South African public an immense justice. Godspeed, sir.

Now, as for the fraudulent and entirely baseless claim by GFSA that the Firearms Control Act of 2000 saved lives between 2000 and 2005.

It is a lie. And a very badly-constructed one at that. It originates from a study performed by Dr Richard Matzopoulos of the Medical Research Council in which he extracted data for the years 2000 to 2005, from one city (Johannesburg), pertaining to one population subgrouping (African males), on one day of the week (Saturday nights). For someone who works as a professional researcher, Dr. Matzopoulos has in this case produced research so poorly performed, an undergrad student would be failed for it. Hence Dr. Matzopoulos is either incompetent, or he is committing academic fraud and hopes that the public and politicians won’t notice.

Either way, his butchered study was thoroughly debunked by Wikus Erasmus (an independent researcher who can actually do research) in 2016. You can read the article here.

Now, the first major and most obviously glaring problem with Doc Matzo’s research, is the time period involved.

The Firearms Control Act of 2000 only became law on 1 July 2004. How on Earth can legislation have a retroactive impact spanning 4 years and 7 months? Quite obviously, it cannot. It is entirely impossible. There is no way, unless a combination of black magic and time travel is somehow employed, that the FCA could have saved any lives between 2000 and 2005. Yet this is what the study claims, and this is what the Sunday Times published.

To illustrate, let me show you a picture. 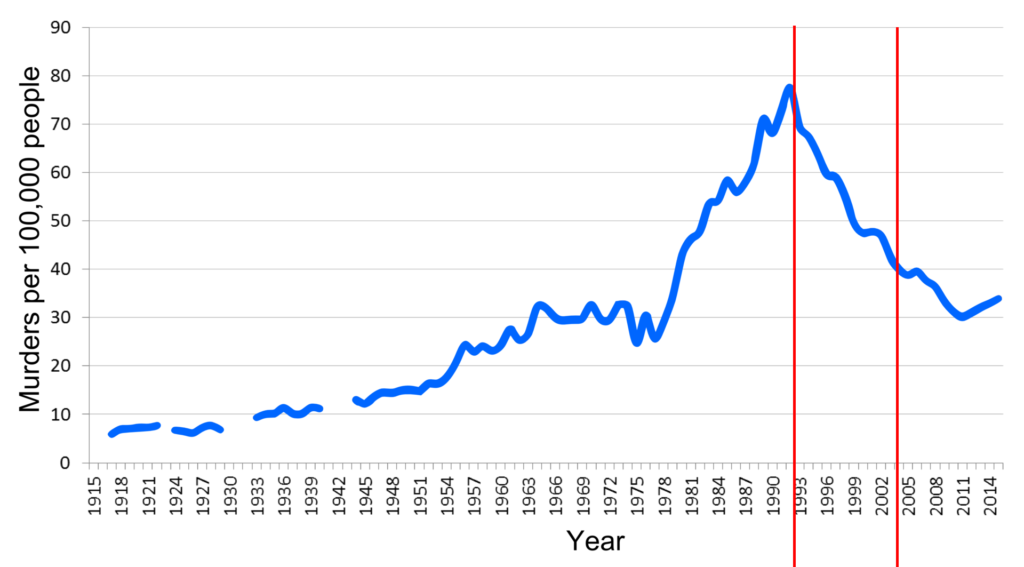 This is the South African homicide rate between 1915 and 2014. The red lines are drawn in 1992 (the first year after our homicide rate peaked in 1991) and mid-2004 (when the FCA came into effect). Do you notice something interesting? Let’s zoom in a little bit. 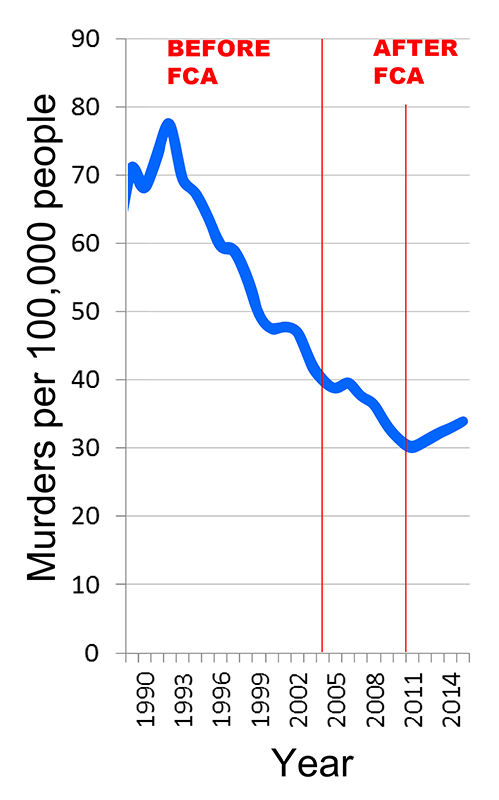 The first red line is when the FCA of 2000 came into effect. There is a noticeable arrest of the murder rate immediately after it became law, followed by an uptick and flattening of the curve, and then it declines again until about 2010, where the second red line is located. What happened in 2010? A firearm amnesty. Law-abiding gun owners who had not migrated over to the new system were coerced and intimidated by the SAPS and Minister of Police to surrender their firearms. Thousands of those firearms were then stolen by corrupt policemen like Colonel Chris Prinsloo and his colleagues, and sold to violent criminals. Who then used these guns, which were safe in civilian possession until the amnesty, to commit violent crimes like murder.

If I were equally dishonest and amateurish in my research, I could make a similar unsubstantiated claim that the old Arms and Ammunition Act 75 saved lives between 1991 and 2004. But I am not an imbecile nor a charlatan, so I will not do that.

I hope it is clear that there is much more to this story than GFSA and the Sunday Times chooses to tell us. The public is purposefully being lied to. It is being deceived by a sock-puppet NGO, who represents no membership base in civil society, to prime public opinion for more irrational gun control measures in the very near future.

May what I have written here shine some light of truth in the dark and dank tunnel of deceitful gutter journalism.

Gun-Free SA often claim to represent civil society, yet they have never furnished any sort of material proof of this. At the time of writing the Paratus Twitter account has more followers than them, and we sit with more than 17 000 subscribers across platforms. Gun Owners of SA has over 45 000 members. Yet we enjoy not a smidgen of the media and political attention that GFSA is given. “Cheque-book journalism” and political skullduggery at work here? Furnish me with a credible opposing hypothesis, and I will think about changing my mind. 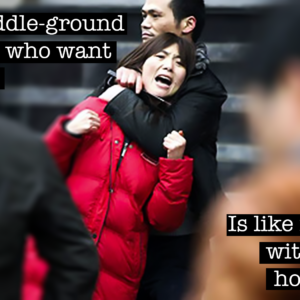 Australia and the NFA -… 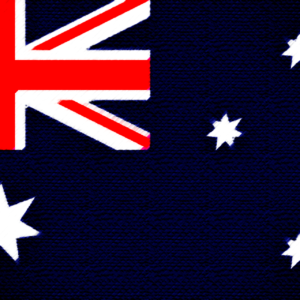