For a number of people, buying that first handgun for defensive purposes is a big step. It is normally accompanied by no small measure of inertia. The catalyst usually being the victim of violent crime, or to have someone dear to them be such victim, or simply that the crime statistics eventually become serious enough to overcome the initial inertia.

I have a great deal of respect for those that do not come from a historic background of exposure to firearms to finally make this step. The mountain of administrative issues that needs to be overcome is not to be scoffed at.

From there we often see first-time firearm owners stricken by FAD, Firearms Acquisition Disease. This is a wonderful disease to have and must be nurtured.

The latest and greatest in the gun catalogues are acquired and licencing becomes far less of a chore when you have done it before. Variation is the theme here. Often people go for the “traditional” four: handgun, shotgun, hunting rifle and for some reason a rifle chambered in .22 LR. Not a bad arsenal by any stretch of the imagination. The person may become involved in sport shooting, and modern sporting rifles and slick semi-auto shotguns are at the order of the day.

I am here to be the handbrake and to advise a different approach, at least for the initial stage:

The second gun to buy is another defensive handgun.

The reasons for my suggestion are myriad, although I will only focus on two.

The one ancillary reason is one of wear. Unless you are a collector wanting to keep the collector’s value of a firearm, you should be shooting your guns. For pleasure too, but largely in order to increase (or maintain) your proficiency, especially with your defensive gun. And as we hear so often, guns are mechanical devices and mechanical devices are subject to wear. In short, shoot it enough and it will break.

In this circumstance, being able to go to your safe and slip another handgun into your holster will be a godsend. Trust me, I’ve been there.

The main reason, and one which I find (at least in my social circle) seemingly more prevalent, is the one where you may be forced to use your firearm in a defensive situation. Procedure seems to dictate that your firearm will be taken by the SAPS for ballistic testing, a process which can take any length of time, and there are all sorts of legal and administrative processes involved before you get your firearm back. Even prosecutors and police cannot agree on the requirements for the return of the firearm, which institutional drag equates to you being without your handgun.

Timeframes I have heard of vary from six weeks to more than two years. You read that right.

Ask yourself this: After having gone through the process of proficiency, competency, and licencing in order to be able to defend yourself, can you really afford to be left without your firearm for two years? Especially in the aftermath of a situation where the accomplices now know that you own firearms, and that you will be without your defensive handgun?

If you have gone through the process of obtaining a firearm for self-defence, you must have considered the possibility of using it for the stated purpose. Take the thought process further and consider that you will be without a firearm for any length of time afterward. And then take it even further and realise that the same steps you have taken in order to obtain a firearm in the first place, can be followed to address this risk equally as well.

It is a depressing thought that the cool-guy stuff needs to go on the backburner until the risks are managed, but like insurance I see it as a necessary evil.

I cannot call it a grudge-purchase. Who would ever have a grudge about buying more firearms?

(Writer has intentionally not addressed the legality of carrying a firearm licenced under section 15. Opinion on the matter differs. Writer’s learned opinion is that it is lawful, but the reader is urged to do his or her own research and reach an independent conclusion). 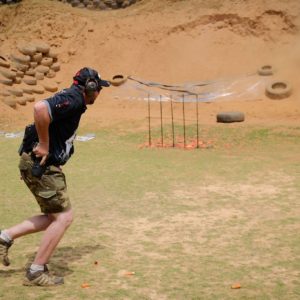