Coming from family that until recently farmed, I have both understanding of and empathy for the plight of farmers. The current media attention of farm attacks is highlighting the reprehensible lack of action taken to prevent these horrific attacks.

However. And this “however” will make me unpopular.

Farm attacks cannot be prevented unless a significant change in the way we view them is undertaken. There is a massive emphasis on the white farmers killed. But how many black farm workers are robbed and no one asks any questions? What about black farmers? Are they not as important?

The robbery of a cell phone outside the farm might well escalate to robbery on the farm. Yet there seems to be little interest in preventing these incidents. One specific example I personally testify to was when visiting a farm not that long ago. The farm owner indicated how scared they were of getting attacked. A day later he said his foreman had just returned from hospital after being stabbed while walking back from some errand on a neighbouring farm.

He was surprised that I would ask so many questions on who the robber was and what the community was doing to catch them. They didn’t know how many attackers, where they went after the attack, if they were on foot or in vehicles, or even if it was someone the victim knew. No interest whatsoever. The reason for this apathy was that the foreman was known for liking to have a drink and then playing cards. Sometimes he would lose money he didn’t have.

This is the reason for the constant escalation of attacks. These are not farm attacks. They are rural attacks. Everyone suffers. When this is understood then it will serve to bring the communities together and in so doing they will be able to far better identify risk factors, eliminate that risk, and make tangible inroads into rural safety.

The second “however” is the fact that most people living in rural areas are woefully underprepared. Buying lots of radios, and night vision, and quadbikes with million lumen spotlights does not count as effective preparation. People confuse being prepared with “prepping.”

The latest reports are of an individual killed after investigating a break in. Yes he was armed. Yes he might have fired a few shots. The hard truth is that he was not prepared. The tragic outcome of this is that he is dead.

Being prepared is a mind-set that must also be instilled, looking at the specific circumstances that are in play. Equipment, no matter how good, means nothing if it’s not deployed correctly.

Facts known about rural attacks clearly indicates that they will:

All these factors indicate that one man with a handgun will be hard pressed to fend off an attack. We know there are never solitary attackers. Groups will often be more than ten individuals. Seldom will there be fewer than five.

These are a few points. I don’t propose to tell anyone how to solve a problem as every community will have its own unique problems and challenges. But there are a few universal truths that can help to alleviate the threat.

Worse than the unprepared people in rural areas are the “tactical” instructors teaching them “tactics” that fall somewhere between outdated and out of context, to dumber than using you bare hands to feel for snakes under the pump housing. Sooner or later it will get you killed or maimed.

The bitter truth is that until the rural communities, be they farmer, worker, or any other stake holder, stops relying on outside sources for help, and start solving their own problems, there will be no change. Rural attacks will decline when the populations are so low that there is no one left to rob and kill.

Education lies at the root of this. Closed-mindedness and stubborn refusal to accept that this affects everyone equally leads to opportunity for criminals to operate with little consequence.

Ultimately this problem belongs to every citizen in this country. No farmers means no food, or at least only imported food. However, if we focus on the farmers and not the entire support structure in place surrounding the farm, we will not be able to change the environment in which rural attacks take place so easily.

The biggest danger is politicizing this to the point where attention moves from finding solutions to only regurgitating the rhetoric of some charismatic leader. This is a practical problem that must be solved practically. Blunt force and bigger-hammer-for-bigger-problem thinking will achieve nothing.

Fighting Injured: How To… 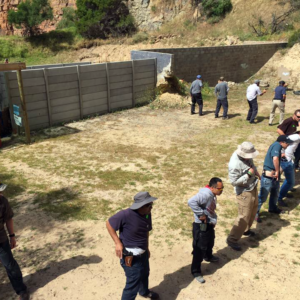