We like to throw terms around. It’s probably inherent to human nature. We love abbreviations, contractions, and other nonsense words. They are little parcels of meaning that escape the uninitiated heathens. We obtain great, gleeful joy in explaining them. And so doing, we both show what giants of knowledge we are, whilst subtly reminding newcomers that they know next to nothing. So they had better harken to our great wisdom.

It’s on this topic that I wish to vent.

We’ve all heard that being a Fudd is bad. That we mustn’t be sheeple. And that sheepdogs are what we need to aspire to. We know the little clichés about the sheep disliking the sheepdogs. This often serves to set us apart from them, and allows us to feel mildly superior about being unpopular. We have the moral high ground, after all.

That most people fall into a class of being similar to sheep is undeniable. Go where the herd takes you. Consume what the herd consumes. And so on, and so forth – indefinitely. Sheeple are content in merely being socially acceptable. Every now and then someone will fail to conform to these norms. Either they become predators or, recognising the predator inside themselves, they act to preserve the herd – while being fully aware that they are not really part of it. (But still eligible for daily deals and the like.)

I once had an interesting conversation with someone at some formal event where we had to wear ties. On this occasion the only dark corner to lurk in, and avoid all the “fun” going on, was a balcony overlooking the main stage. The seating was quite comfortable. A friend soon came along and made some comment about how he knew I’d be hiding where no cameraman could find me. We settled in to watch the last of the speeches. As soon as the meal was announced, people surged to get food. We skipped it. The dance floor opened when the meal was over. People then surged onto the dance floor. What followed is best described as dancing, although it may have been a mass epileptic fit poorly coordinated with music. I’m no expert on either. We emphatically skipped the dancing too.

Then my fellow malcontent commented that the people below us really do move like a herd. One takes a certain path through the tables, and soon everyone is doing the same. I replied that this is why people are often called sheeple. He laughed and joked that if failing sheepdom, am I a wolf? The comment took me aback. How can anyone, anyone sane at least, think of themselves a wolf? So, I got to thinking on the semantics of the situation.

I realised that if I’m anything, I’m a goat.

Goats are marginally more intelligent than sheep. They have horns. And while sheep also have horns, sometimes goats use theirs. Goats are great at causing environmental damage and turning good grazing into desert. Goats are not shy about being goats either. So goats are a lot like people.

When sheep are grazing and one gets a little way away from the herd, it will panic and go off “Baa! Baa! Baa!”, sprinting in terror at being left behind. Goats typically don’t. They just keep calm and amble back to everyone else.

I’m glad I’m a goat. If nothing else, the beard is expected. Although I’m far less gassy than a goat.

Sheepdogs are an entirely different class. They are not just dogs running after sheep. They are highly-trained, tightly-controlled, and very specialised. Sheepdogs are dogs with a job. A dog that attacks a sheep is possibly killed. But permanently running it off the reservation works just as well. The farmer treats a sheepdog that hurts a sheep much more harshly. They very seldom live. We hold them to a much higher standard. As they should be.

So why are so many people so keen to be sheepdogs? Or, more phonetically appropriate – “sheepdawgs”? One of the most inane and ridiculous things I’ve heard is someone saying; “I carry a gun because I’m a Sheepdog”.

Sheepdogs, in the sense you mean, are equipped to perform their jobs. Sometimes this includes weapons. But they aren’t sheepdogs because they have teeth. It’s inherent in their nature. And they simply equip themselves to fulfill a job. A function. Something they would be doing even without any specific tool.

You, my friend, are at best a closet goat. Or at worst, a sheep with delusions of grandeur.

Paramedics, firemen, police, and military personnel; these are sheepdogs. If they fail to protect a sheep, they are often charged with something in the vein of “dereliction of duty”” or “failing in their oath”. They suffer real consequences if they fail to live up to the moniker. You don’t.

And yet the natural habitat of the sheepdawg is in the neighbourhood watch. There they can do the most damage. If not there, then they will gravitate to some other position offering minor status and a chance to talk guns. They love guns. And knives. And airsoft-grade body armour. Big torches, preferably rechargeable so they don’t have to buy batteries, are also a big deal for them. They may or may not own and operate a bush hat and or a pair of desert tan boots.

The concept of if-not-sheepdog, then definitely sheepdawg, has entered general use. We feel pressured to conform to certain ideals of what a sheepdog should be. But when you put twenty of any dog in a room for any length of time, it’s inevitable that there will be a fight. And while that’s going on the wolves are eating some sheep over here, and other sheep are wandering off over there, and nobody is thinking about the meerkats carrying off all the salt lick.

Maybe its best not to try and be a sheepdog. Maybe being a responsible and independent sheep is better. Like a goat, but better at the braai.

Preparing for Your Personal… 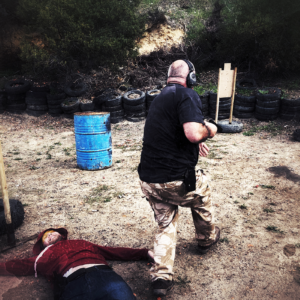 Preparing for Your Personal Gunfight - Fight to Win 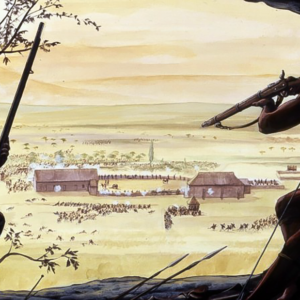